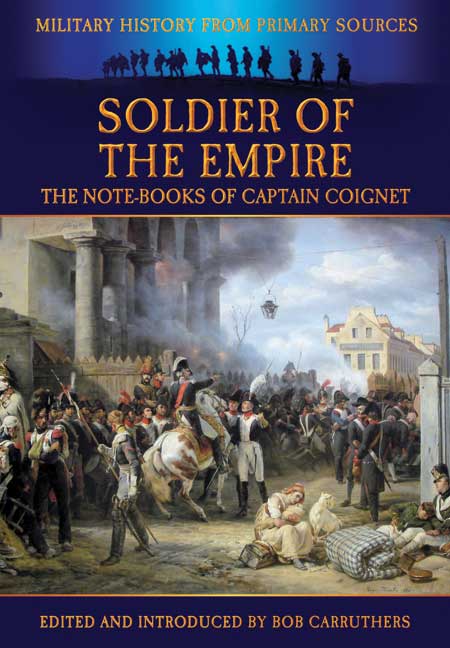 Soldier of the Empire (Paperback)

The Notebooks of Captain Coignet

Add to Basket
Add to Wishlist
You'll be £12.99 closer to your next £10.00 credit when you purchase Soldier of the Empire. What's this?
+£4.50 UK Delivery or free UK delivery if order is over £35
(click here for international delivery rates)

Jean-Roch Coignet (1776 – 1865) was a French soldier who served in the military campaigns of the Consulate and First French Empire, up to the Battle of Waterloo.

Coignet was conscripted in 1799 and served as a grenadier in the 96th Line. Early in his career he fought hard at the Battle of Montebello and the Battle of Marengo, after which he was promoted to the guard and awarded the Légion d'honneur. As a grenadier of the guard Coignet fought at Ulm, Austerlitz, Jena, Eylau and Friedland. After being promoted to corporal, he took part in the invasion of Spain and the Battle of Somosierra and the pursuit of the British army. Coignet then fought at Aspern-Essling. After victory in the campaign Coignet rose to the rank of sergeant, eventually becoming baggage-master. Coignet was sent on a series of solo missions for the Emperor during the disastrous invasion of Russia. After this, Coignet was promoted to captain in Napoleon's staff. Coignet participated in the campaigns of 1813-1814 and rejoined the Emperor during the Hundred Days. He was present at Ligny and survived Waterloo.

Coignet settled in Auxerre, running a tobacconist's shop. He later wrote his memoirs detailing his military service in The Notebooks of Captain Coignet after the death of his wife in August 1848. These were initially published in Auxerre between 1851 and 1853 under the title Aux Vieux de la Vieille.

Coignet's memoirs are amongst the most famous and oft-quoted of any of those of soldiers who fought in the Napoleonic Wars. It is not surprising. He was prset at all major battles from Marengo to Waterloo, went from private to junior officer, line regiment to the guard and eventually became a member of Napoleon's staff. His memoir is full of amazing observations, experiences and anecdotes that provide a remarkable insight into Napoleon's army and its campaigns.