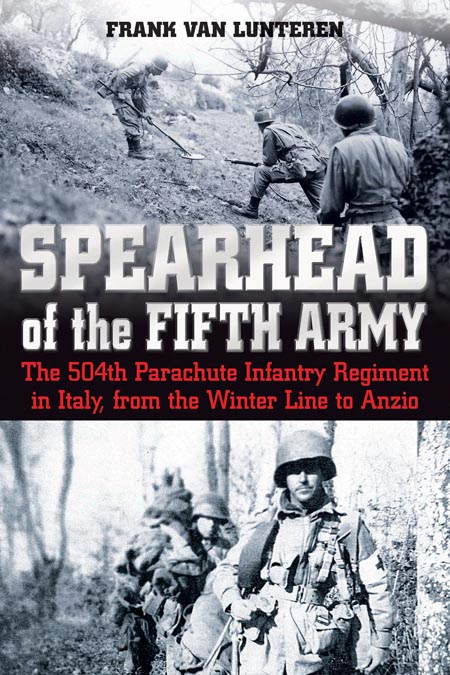 Spearhead of the Fifth Army (Hardback)

The 504th Parachute Infantry Regiment in Italy, from the Winter Line to Anzio

Add to Basket
Add to Wishlist
You'll be £25.00 closer to your next £10.00 credit when you purchase Spearhead of the Fifth Army. What's this?
+£4.50 UK Delivery or free UK delivery if order is over £35
(click here for international delivery rates)

Upon the completion of the Sicily and Salerno Campaigns in 1943, the paratroopers of Colonel Reuben Tucker’s 504th Parachute Infantry Regiment were among the first Allied troops to enter Naples. A ghost town at first sight, the residents soon expressed their joy at being liberated. Four weeks later the 504th – upon the special request of General Mark Clark – spearheaded Fifth Army’s drive through the notorious Volturno Valley – the Germans’ next stand.

January 1944 seemed to promise a period of rest, but the landing at Anzio meant deployment for the paratroopers again, this time by ship. A bombing raid during their beach landing was a forecast of eight weeks of bitter fighting. Holding the right flank of the beachhead along the Mussolini Canal, the paratroopers earned their nickname “Devils in Baggy Pants” for their frontline incursions into enemy lines, as well as their stubborn defense of the Allied salient.

In this work H Company’s attachment to the British 5th Grenadier Guards – and the Victoria Cross action of Major William Sidney – are painted in comprehensive light for the first time. Also the story of Honorary Member of the 504th P.I.R., Italian veteran Antonio Taurelli, is included. Using war diaries, personal journals, letters and interviews with nearly 80 veterans, a close-in view of the 504th P.I.R. in the Fifth Army’s Italy Campaign is here provided in unsurpassed detail.

This work is the third by Van Lunteren on the 504th P.I.R. In World War II following The Battle of the Bridgesand Blocking Kampfgruppe Peiper . As readers will see, however, the Italian theater held second place to none in terms of grueling combat and courage against formidable odds, and an extremely expert enemy.