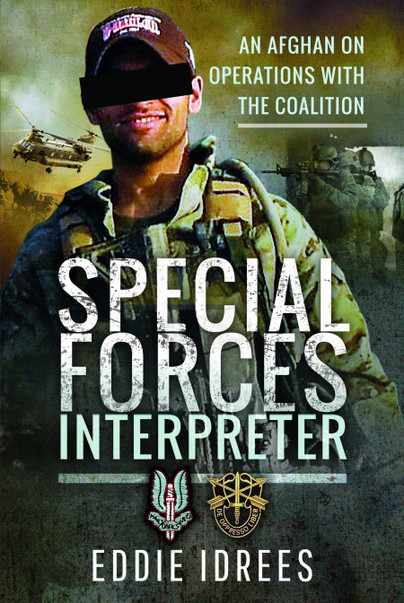 An Afghan on Operations with the Coalition

As featured in the Daily Express: 'Afghan tragedy: The comrades of those who survived are "dead or in fear of their lives"'. Read the interview with author Eddie Idrees online here.

As featured in the Daily Mail: read the article by Eddie Idrees online here.

You'll be £13.99 closer to your next £10.00 credit when you purchase Special Forces Interpreter. What's this?
+£4.50 UK Delivery or free UK delivery if order is over £35
(click here for international delivery rates)

Eddie Idrees, a pseudonym for security reasons, has a fascinating and inspiring story to tell. Born in Afghanistan, he spent time as a refugee in Pakistan during the civil war dreaming of serving with the military. As this unique memoir reveals, his wishes came true in spades.

For eight years from 2004, Eddie worked as an interpreter with, first, American Special Forces before moving across to the Special Air Service. A veteran of over 500 operations, he describes the most notable ones including breaking into a Taliban prison to free prisoners about to be executed. He was the first Afghan interpreter to parachute in with the SAS.

His aim in writing his story is to explain the interpreter’s role and contribution and the challenges and threats they faced, not just from the Taliban. For all the media attention, these have never been fully understood.

Eddie concludes by describing his experiences and emotions on leaving his fractured and politically corrupt homeland and making a new life in the United Kingdom.

Special Forces Interpreter demands to be read and not just for its vivid and thrilling descriptions of Special Forces’ operations.


"...a captivating story not only about Special Forces operations in Afghanistan, but also about human fortitude in difficult times".

I fled the hell of Afghanistan... only to find the enemy in Britain

If you want to know what it's like to be an interpreter for the US and UK Special Forces, then this is your book!

"The book provides an explanation of the Afghan interpreter’s role and contribution in the fight against the insurgents...Those who served with the military in Afghanistan will already be familiar with the important role that Afghan interpreters played during that conflict. For those that haven’t the book will provide insight as to why so many US and UK Afghan war veterans are so forceful in their arguments that the Afghan interpreters should be allowed entry into the United States."

A fascinating and revealing insight into the world of local Interpreters in the British and American military during the military campaigns in Afghanistan,
The author was attached to the Allied Special Forces in Afghanistan and participated in hundreds of covert and very dangerous missions against the Taliban and Al Qaeda. The 'Terps' played a vital role in acting as the interface between the civilian population and the NATO military. Sadly, they were hated and mistrusted by a large majority of Afghanis, leading to widespread executions of them and their families.
Most of us know that interpreters were widely used by the military, but were unaware of their very high death rate. The author, understandably, skims over a lot of details of his highly classified missions. What horrors he must have seen, which must have affected his mental health.
One detail I found really fascinating was the headset that the author used on operations - one earpiece was tuned into the NATO frequencies, the other into listening to the Taliban chatter. He was also expected to be able to converse in English and Pashtun at the same time as monitoring his headset conversations - all in the middle of a conflict zone!
The way the interpreters were treated after the Allies left was appalling. Many were left to be executed by the Taliban, even though the allied forces were fully aware of the interpreter's eventual fate. Some, including the author, were eventually given asylum in the UK and US, but were treated abominably by the immigration authorities.
An easy, and sometimes shocking read. Congratulations to the author.

Wow, this was quite the read! I have never read a book before which was written by an interpreter and this one was an eye-opener.

Eddie worked with the Americans in Afghanistan as an interpreter and the British SAS as well. He went on missions with them and he got fully involved with those operations, not just interpreting/translating but also bearing arms etc. His hatred of the Taliban is clear, and it is also very clear why he needed to relocate to the UK, to keep himself and his family safe.

Idrees provides an inside view of missions carried out during his time in service; he also sheds light on the depressing fractures that exist among the Afghan people, both in their country and in the UK. Readers are left more knowledgeable about the conflict and also with a heavy heart for this young man and the many others like him.

Extremely interesting and emotive book.
‘Eddie’ takes us from childhood in Afghanistan to living as a Asylum Seeker in the UK and all that’s inbetween, and it’s full on, enlightening and informative, dramatic, scary, anger inducing and upsetting.
It is obvious from the onset his love for Afghanistan, his home and his heartbreak for the past decades of hell his Country has gone through and how via a complicated but fascinating route he becomes an interpreter for the SAS, he details missions he was involved in and his life through the years and what really went on ( from what he saw ) in Afghanistan/Pakistan and what is happening now in the UK, it is frightening stuff in part and his hatred for the Taliban is given no short measure, I admired his honesty and his love for his Country and his pride in working for the SAS.
Written well and reads easily as only a book where someone is relaying their life to a stranger can it is truly an eye opener and I finished it having only respect for him and his life.
Thoroughly readable.

Fantastic insight. Having the courage to carry out your conviction is one thing, this takes it to another level. Wow!!

I fled the hell of Afghanistan... only to find the enemy in Britain: A brave interpreter who risked death on SAS missions reveals how he discovered Islamist extremists in the UK spouting the very hatred he thought he'd left behind

Eddie Idrees (not his real name) was born in Kabul in 1985. His father was a colonel in the Afghan army and his mother a university lecturer. He went to school initially in Afghanistan before moving with his family, out of necessity during the civil war, to Peshawar, Pakistan for secondary and higher education.

From 2004 he worked for the Americans and US special forces before being assigned to the US Army Counter-Insurgency Academy in Kabul. In 2009 he was re-deployed to the British Special Air Service with whom he interpreted and operated until 2012.

He emigrated to the United Kingdom later that year. He has since gained a degree at a leading university and is currently studying for his Masters at another.