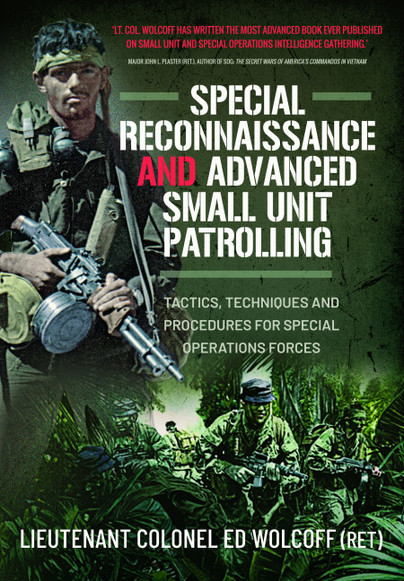 Preorder
Add to Wishlist
You'll be £24.00 closer to your next £10.00 credit when you purchase Special Reconnaissance and Advanced Small Unit Patrolling. What's this?
+£4.50 UK Delivery or free UK delivery if order is over £35
(click here for international delivery rates)

This book will serve as a tactical “bible” tailored to the military Special Operations, intelligence and paramilitary/law-enforcement communities and other interested parties - - with the intention of breaking the invent-and-forget/reinventing-the-wheel cycle with an aim to (1) increase the effectiveness and lethality of SpecOps personnel and units, while (2) saving the lives of SpecOps personnel engaged in high-risk operations.

Wolcoff describes numerous historical examples of special reconnaissance (SR) operations, with some emphasis on lessons-learned/Tactics, Techniques, and Procedures gained from the legendary Military Assistance Command Vietnam – Special Operations Group (MACV-SOG) SR operations conducted during the Vietnam-era, including operational accounts and analyses of specific missions. Few of these TTPs and lessons-learned have been archived or collated into a usable form for SpecOps personnel or units; this book is intended to preserve and embed this valuable and volatile compilation of tradecraft, that has been obtained at such cost in lives. Wolcoff covers the gamut of specialized SR topics ranging from operational planning and preparation, through execution, logistics and command and control - - all in substantial trade-craft detail.

Lt. Col. Wolcoff (ret.) served in Special Operations Group and went on highly classified Special Reconnaissance missions. He also spent over seven years in Explosive Ordnance Disposal. A decorated veteran with years of experience as a team leader in aggressive, cross-border operations, Wolcoff is uniquely qualified to present this invaluable document for Special Operations personnel. After the military, Wolcoff worked in support of the National Security interests of the United States.