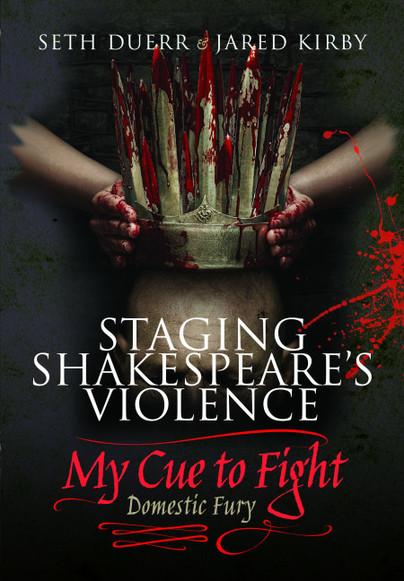 Signed copy available – request a signature plate at the checkout
Add to Basket
Add to Wishlist
You'll be £30.00 closer to your next £10.00 credit when you purchase Staging Shakespeare's Violence: My Cue to Fight. What's this?
+£4.50 UK Delivery or free UK delivery if order is over £35
(click here for international delivery rates)

My Cue to Fight is the first book of its kind to provide an in-depth examination of how the greatest playwright in the English language employed not only psychological brutality but also physical violence throughout his works. Written ideally for theatrical stage directors, fight directors, intimacy consultants, and actors as a technical scene-by-scene breakdown in staging combat during production of these plays, this publication is also for Shakespeare enthusiasts who want to learn more about the blood, sweat, and viscera hidden just underneath the poetry.

A writer utilises violence, like song or dance, in moments where the story requires more than just words. But addressing how the violence will be staged tends either to be neglected or utterly gratuitous, both of which serve to separate the audience from the story and kill the whole venture. The answer rests in approaching violence the same way we do scenework. The plays of William Shakespeare seek to engage audiences with all of the characters’ blood, tears, sweat, and guts. These works are not flowery poems meant to be mumbled in a classroom, or histrionically declaimed in frilly costumes. There is nothing light and fluffy about 'rape' and 'murder’s rages', or 'carving' someone as a dish fit for the gods, or fighting till from one’s bones one’s 'flesh be hacked'. Making matters more complicated is the ambiguity and sometimes even complete lack of stage directions. Modern texts typically possess clear directions whenever violence is to occur in the action, but playscripts were quite different four centuries ago. Such denotations were both rare and inconsistent in Elizabethan and Jacobean printings. The potential violence we will examine is not appropriate for all productions or scene partners. We’re here to question and inspire rather than provide catch-all solutions. Actors, directors, fight directors, and intimacy consultants must work together to find the most effective way for their production to communicate the playwright’s story to the audience.

This was a really interesting read, I enjoyed getting to read this very much, it was a interesting take and I appreciated how much effort the authors did.

Seth Duerr is the Founder and Artistic Director of The York Shakespeare Company and has appeared in and/or directed 34 productions of Shakespeare. He is a proud member of Actors’ Equity Association, SAG-AFTRA, the Society of Stage Directors and Choreographers, and serves on the Advisory Board of Wingspan Arts.