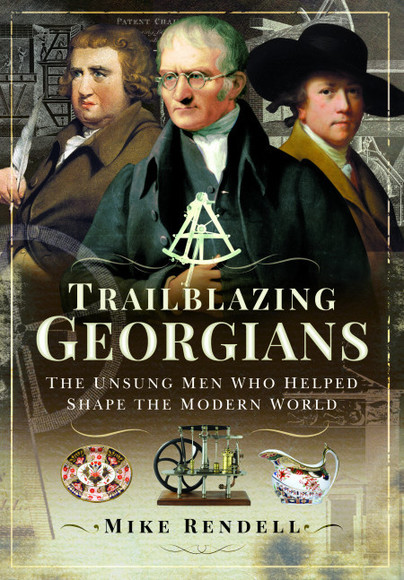 The Unsung Men Who Helped Shape the Modern World

An article written by the author for Dan Snow's History Hit: 'Who was Philip Astley? The Father of the Modern British Circus'

You'll be £19.99 closer to your next £10.00 credit when you purchase Trailblazing Georgians. What's this?
+£4.50 UK Delivery or free UK delivery if order is over £35
(click here for international delivery rates)

Other books deal with the men under the spotlight of fame – the ‘lead singers’ of the Industrial Revolution. What this book tries to do is to focus on the ‘other boys in the band’ – the less famous inventors, artists, engineers and industrialists who played their part in the enormous changes that occurred in the eighteenth century.

You will not find James Watt, Josiah Wedgwood or Richard Arkwright – they have hogged the limelight long enough. Instead, you will meet the men who made their mark and then faded into obscurity – the man who came up with Sheffield Plate (Boulsover) and helped bring silver decorative ware into the reach of the general public; the man who heralded the development of costume jewellery by using an alloy resembling gold (Pinchbeck); the men who used papier-mache strong enough to make chairs, and versatile enough to make lacquer-ware as fine as anything found in China (Baskerville and Clay).

It is a book about scientists and engineers operating in areas which were completely new – Smeaton in civil engineering, Maudslay in machine tool manufacture, Repton in landscape gardening and Bakewell in the selective breeding of animals. It is also about entertainers like Astley, who introduced variety acts into circus performances – the forerunner of modern mass entertainment. It features J.J. Merlin, a clockmaker who inspired the young Babbage to develop an interest in the field of computing. These artists, scientists, inventors and industrialists all feature because, by some quirk of fate, they have never received the acclaim which they deserve.

Author article ‘Let there be light’ as featured by

I’m always a bit wary of group biographies as sometimes they can be somewhat superficial and reductive, but this one is extremely well-written and manages to be concise yet at the same time comprehensive in each of its potted biographies of the lesser known or nearly forgotten movers and shakers who shaped our modern world, the inventors and industrialists whose names have been overshadowed to some extent by their more renowned peers. This entertaining and informative book is an ideal introduction to the Georgian world and its development and is a great read.

I must admit I was looking forward to this book arriving as I have a soft spot for the Georgian and Victorian era’s. Plus I wanted to hopefully use the book to produce a Georgian page for my website. Up soon, so you can visit at ukhistorian.co.uk So the Trailblazing Georgians and very good it was indeed as it divides itself into chapters that look at scientists, builders, innovators, merchants, naturalists, entertainers and crafters. But this book isn’t about the prominent people of the time that we’ve all heard of. This is about the next level down, the people who were famous and successful but not as much. But this is what made the book really good to read, we’ve all heard of the really famous people like the Brunell’s and Brown’s, it was nice to hear about people who achieved something but didn’t quite get the recognition they deserved.

This book was well written and entertaining by the author, it certainly kept me glued to it. A book that I would have thought would do well as the Georgian period is an often misunderstood era.

Another foray into the history of the men who changed lives before the advent of the Victorians. These men were the architects of the industrial revolution and they are remembered and celebrated in grand style in Mike Rendell's superlative book.

Many of the men listed above were experimenters, some of humble origins, others exploited or frustrated in their endeavors by far more famous colleagues who then took their laurels in their place. Some were larger than life characters such as Baskerville, an atheist who printed many religious texts with his beautiful typeface and who was very uninhibited about the social patterns of the time. Others were real "stars" like Astley, who made his passion for horses bear fruit (and the providential rescue in battle of the Duke of Brunswick). All good or bad ended up forgotten. With this book Rendell brings them back to the light they deserve, because they are characters who have changed theirs and our world.

Author as interviewed by

Mini biographies of men overlooked by history or overshadowed by other family members. Fascinating read, entertaining and informative.

Rendell’s latest “Trailblazers” history tells the story of a number of the almost-rans in Georgian England. His focus in on the thinkers and inventors whose names didn’t necessarily make the history books, but whose work powered the great industrial revolution of the period.

Even though I found myself skimming some of the engineering details that Rendell does so well, I was fascinated by these men and their work. I look forward to walking in their footsteps on my next trip to England and looking with a more discerning eye at some of their constructions.

Good introduction to a number of men in a few different areas of study or entertainment. One right after the other, a brief biography and work life. Some primary imagery and text to go along with pretty much all of them.

This is a very readable collection of pen portraits of about 30 lesser-known, forgotten or over-shadowed inventors with a wide variety of interests who were active in the late seventeenth and eighteenth century Britain, the "Age of Enlightenment".
The passage of time, personal qualities and situation of these men, their contemporaries and, for some, their descendants have not been kind to them; during their life times they did not get much recognition and by now they are largely forgotten. In many instances, for example, contemporary innovators who took advantage of the inventions and were wealthy enough to patent their model had the financial benefit, the fame and, now, have the place in our history books.
It is important to remember that developments in ideas during the Enlightenment were not restricted to certain places, areas of interest nor social groups. One of the most characteristic aspects of that era was the increasing interest in the cross-fertilisation of ideas between people and across places. There were many cogs in that wheel of intellectual, social and practical change; this book outlines some key players that should be added to the conventional hall of fame.
"Trailblazing Georgians" is an ideal introduction for anyone studying Georgian Britain and the Enlightenment. It would be an excellent addition to the history curriculum for UK schools.

Marc Isambard Brunel was born on 25 April 1769. Whereas he should be known more for his engineering contributions such as the construction of The Thames Tunnel, he is largely overshadowed by his son Isambard Kingdom Brunel’s legacy.

Richard Trevithick was born on 13 April 1771 in Cornwall. He was a British inventor who built the first working railway steam locomotive.

Death of John Michell on 21 April 1793. He was clergyman and English natural philosopher, whose modesty of his knowledge led to his virtually unknown name today. He has been described as “being so far ahead of his scientific contemporaries that his ideas languished in obscurity, until they were re-invented more than a century later”.

Richard Trevithick died on 22 April 1833 in Dartford in Kent. Despite building the first working railway steam locomotive, Trevithick would sadly die destitute, and his work colleagues had to raise funds for his burial.