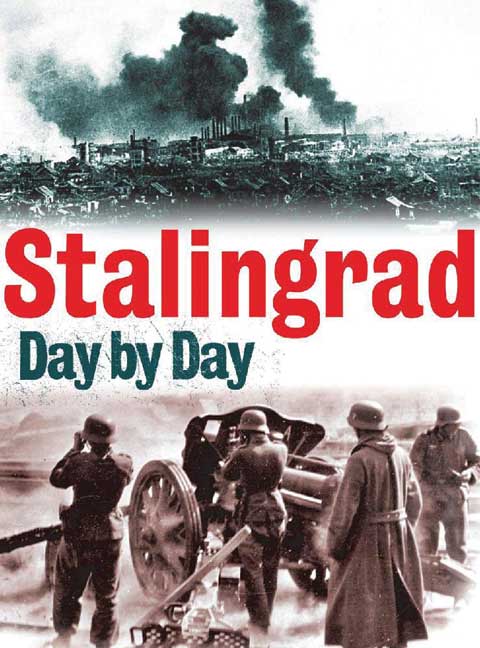 Add to Basket
Add to Wishlist
You'll be £19.99 closer to your next £10.00 credit when you purchase Stalingrad Day by Day. What's this?
+£4.50 UK Delivery or free UK delivery if order is over £35
(click here for international delivery rates)

The Battle of Stalingrad was the turning point of World War II. The armies of Hitler’s Nazi Germany and Stalin’s Communist Soviet Union fought to the death in this industrial city on the banks of the Volga. Initially, it seemed impossible for the Soviets to hold out against the Wehrmacht and supporting Luftwaffe aircraft, but the handto- hand fighting in ruined factories, rubble-strewn streets and houses pockmarked by machine-gun bullets gradually turned events in their favour.

Then, vast outflanking movement led by Marshal Zhukov in November 1942 dramatically turned the tables, surrounding General Paulus’s German Sixth Army. Over a period of three months this army was bled white while Hitler refused to let it break out to the west, and Hermann Goering’s claim that he could supply it from the air turned out to be the hollowest of boasts.

It is a good account of the battle as you are likely to encounter without going into enormous detail, and it is at all times very readable.

The book is illustrated throughout with photographs from the time as well as maps describing the actions taking place. A fresh, easy to understand account for those new to the subject.

The package comes with well paced text and interesting captions. The crucial elements are the photographs which are pretty good for an all encompassing book which inevitably make it something of a catch-all. There are no cheap or easy shots. What we have is a thoroughly decent book. It is reasonably priced and easy to read. It will make you want to explore the war in the East further so ultimatly it has done its job. Top marks.