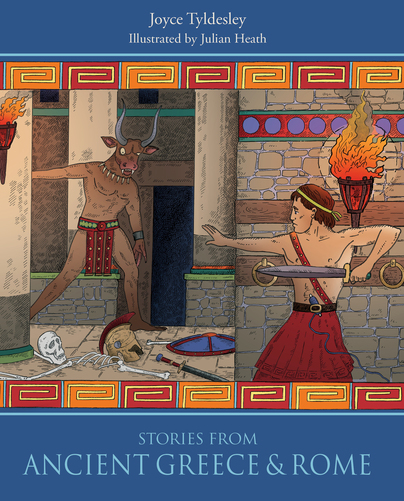 Add to Basket
Add to Wishlist
You'll be £8.95 closer to your next £10.00 credit when you purchase Stories from Ancient Greece and Rome. What's this?
+£4.50 UK Delivery or free UK delivery if order is over £35
(click here for international delivery rates)

In a companion book to the best-selling Stories from Ancient Egypt, Joyce Tyldesley re-tells some of the most interesting and entertaining myths and legends from the Classical world. These stories tell us how the spider spun the first web, how a simple ball of string defeated the fearsome minotaur, and how Romulus founded the mighty city of Rome. The “this book belongs to” introductions teaches the reader how to write their name using ancient Greek letters, and their age using Roman numerals. Each of the stories includes a question and answer section for enthusiastic young archaeologists.

The book is illustrated with imaginative and amusing line-drawings by acclaimed artist and archaeologist Julian Heath.