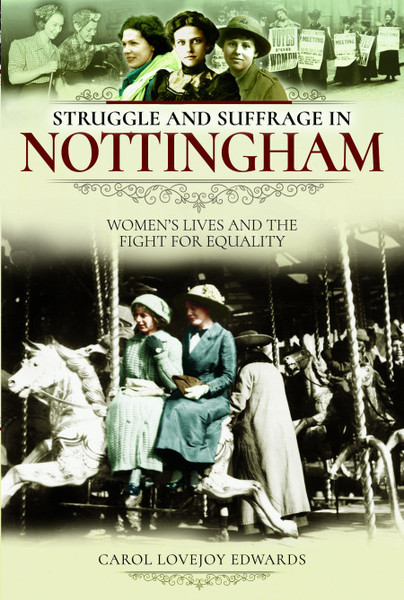 Struggle and Suffrage in Nottingham (Paperback)

Add to Basket
Add to Wishlist
You'll be £10.49 closer to your next £10.00 credit when you purchase Struggle and Suffrage in Nottingham. What's this?
+£4.50 UK Delivery or free UK delivery if order is over £35
(click here for international delivery rates)

Struggle and Suffrage in Nottingham is the story of many women across the generations and their struggle for equality. This was not just a struggle for the vote but also for equality in the workplace and even in their own homes.

Women gave a great deal to this country and still do. This book is a celebration of just some of those women whose stories as a whole are too many to tell. We owe our privileges today to those many women who struggled for the freedoms we are allowed to take for granted today.

The centenary that is the subject of this book covers two world wars where women took on men’s jobs, with many sacrificing their lives along the way. These women suffered humiliation and force feeding in their quest for the vote and yet continued working towards their dream.

This is the first book to concentrate solely on this period in women’s history in our county and shows the struggle women endured at a time when equality was rare among men as well. A woman’s job was seen to be purely looking after the house and raising children. Many men felt threatened by any woman who wanted more.

It tells of their welfare work, their war work, their political efforts and the hardships endured in their own homes. Included are the stories of Helen Watts suffragette; Lady Laura Ridding, wife of the Bishop of Southwell; and Lady Maud Rolleston, who followed her husband to the Boer War, as well as ordinary women undertaking war work, some of whom were Canary Girls in the munitions factories who lost their lives in an explosion in 1918.

Nottingham is a city known for its rebellious acts, this centenary in women’s history was no different.

This book is merely a place to start when looking at this period in our local history. It cannot cover but a small amount of the work carried out in our city by innumerable women over the centuries.


latest in Pen and Sword’s remarkable series on women’s suffrage around the UK sees Carol Lovejoy Edwards examining the women of Nottingham as they joined the biggest struggle in British history. The women included in Carol’s excellent book read like characters from the BBC’s Up The Women, which is good, because it makes them real, and one can imagine their passions and their determination by imagining them as being played by actresses such as one has seen on TV. A brilliant book.