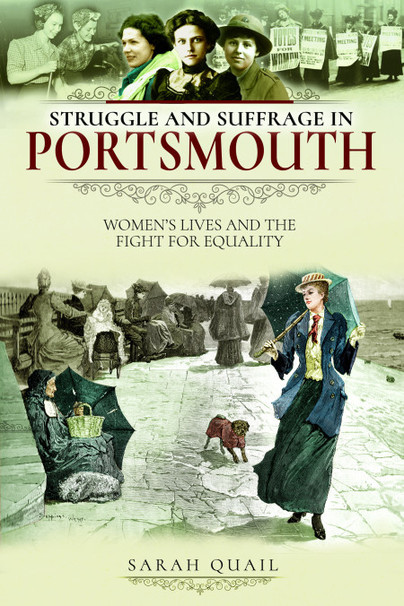 Struggle and Suffrage in Portsmouth (Paperback)

Add to Basket
Add to Wishlist
You'll be £7.79 closer to your next £10.00 credit when you purchase Struggle and Suffrage in Portsmouth. What's this?
+£4.50 UK Delivery or free UK delivery if order is over £35
(click here for international delivery rates)

The women of Portsmouth had of necessity to be tough. They kept their families together during long naval and military deployments overseas, raising their children on their own for much of this time. They worked in domestic service, in nearby stay factories or simply took in sewing to complete in their own homes, often with the help of their children.

The local suffrage campaign was driven as much by the lack of opportunities for middle-class women as reaction to sweating in local stay factories and the injustices of the Contagious Diseases Acts. Women’s own voices are seldom heard in surviving sources before the end of the 19th century, but as the century came to an end suffragists, pioneers of women’s education, women who stood for public office for the first time, and those who entered the professions began to step forward.

The First World War gave women the opportunity to prove that they could be effectively integrated into a male workforce. Similar sentiments were expressed by local women barely a generation later during the Second World War. This time the war came to Portsmouth and much of the old city was destroyed by enemy bombing. With their men away, women had to cope on their own with this wholesale destruction of their homes and communities - and the deaths of relations and friends.

Women’s own voices are heard most effectively for the first time in the post-war period through the medium of oral history. Recordings made over the last thirty years and printed, edited extracts of those recordings are used to detail women’s lives and more recent times, and the continuing fight for equality.

This book covers fascinating aspects of life in Portsmouth well before the main suffrage movement and this background enhances our understanding of the late nineteenth/early twentieth century suffragettes and suffragists. There are excellent illustrations and the whole book is beautifully produced and simply full of wonderful nuggets of information. Great value and a worthwhile acquisition for anyone interested in social, maritime or women's history.

Sarah Quail has lived and worked in the Portsmouth area for many years. She spent most of her career in local government and has written and contributed to a number of books and articles on different aspects of Portsmouths history. She is a member of the Church Buildings Council, a school governor, and a member of the board of management of her local arts centre.