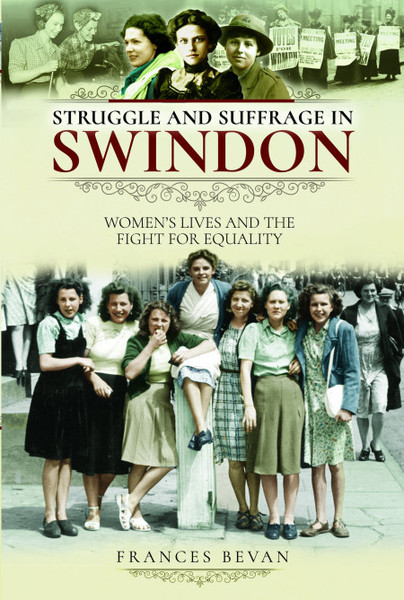 Struggle and Suffrage in Swindon (Paperback)

Add to Basket
Add to Wishlist
You'll be £14.99 closer to your next £10.00 credit when you purchase Struggle and Suffrage in Swindon. What's this?
+£4.50 UK Delivery or free UK delivery if order is over £35
(click here for international delivery rates)

As the industrial revolution and the coming of the railways transformed the Wiltshire countryside Swindon women were on the front line of change, shaping the new industrial town and transforming the old market one.

Incomers arrived from the great railway centres across the country to create a welcoming, tolerant and creative community with women’s contribution at its heart.

Following the incorporation of Old and New Swindon in 1900 innovative women stepped up to the plate; women like Swindon born suffragette Edith New who challenged political conventions and Emma Noble, Swindon’s first female councillor, who campaigned to improve living conditions in the town.

During two world wars Swindon women worked in the railway factory in jobs once considered beyond their strength and endurance. Women supported the war effort on the home front, volunteering in what little spare time they had.

Women such as teachers Mary Slade and Kate Handley who during the First World War headed the Prisoners of War Committee, which sent food parcels to soldiers from the Wiltshire Regiment held in German prisoner of war camps. Mary Slade was awarded the MBE in 1920 but her work didn’t end there. Mary Slade and her team continued to support the bereaved families beyond the armistice and through to the end of the Second World War.

The story of Swindon women includes artists and actresses, political activists and social reformers and the ordinary women who worked in the factories, raised their children and made a difference.


Article: 'The stories of women who changed history' as featured by

A clear, concise and easy-to-read account of the period 1850-1950, concentrating on the overlooked women in a town with a rich and varied history. Focusing on education; work; love and marriage; health care and motherhood; and the Votes for Women campaign this book celebrates and commemorates their work and achievements and should be a source of pride for Swindonians and beyond.

Frances Bevan is herself an incomer who moved to Swindon more than 30 years ago. Since then she has studied the lives of Swindon women, discovering both the ordinary and the exceptional contributions they have made to the history of the town. Frances also conducts guided walks at Radnor Street Cemetery and other local churchyards telling the stories of the women of Swindon.