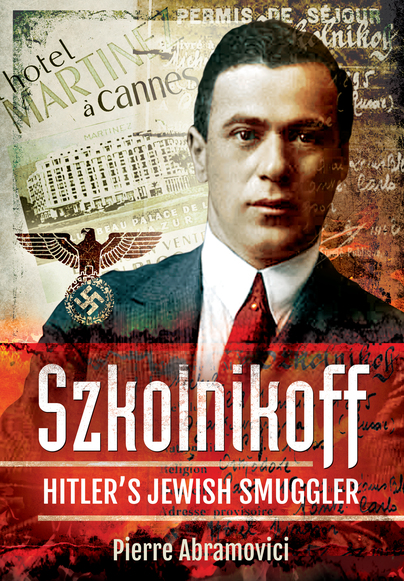 As featured on Mail Online: The Jewish crook who was HITLER'S top smuggler for stolen loot...

You'll be £19.99 closer to your next £10.00 credit when you purchase Szkolnikoff. What's this?
+£4.50 UK Delivery or free UK delivery if order is over £35
(click here for international delivery rates)

On 10 June 1945, a charred body was discovered near Madrid. The man was identified as Mendel Szkolnikoff, a Jew of Russian origin who was probably one of the biggest traffickers of the Occupation; since 1941 he had collaborated with the Germans by supplying textiles to the SS and the Kriegsmarine in particular.

In a remarkably short space of time, Szkolnikoff amassed a spectacular fortune including prime real estate in the most sought-after areas in Paris and various hotels and 'palaces' on the French Riviera. Although his property and fortune were impounded after the Liberation, the French authorities have continued to pursue his descendants to this day, which is in fact, illegal!

Seventy years after his death there are still many questions that remain unanswered: Who did Szkolnikoff actually work for and who was it who protected him? What happened to the enormous amounts of money he deposited in his Monacan, Swiss and Spanish bank accounts before he died? Who was the mysterious commando unit who captured and killed Szkolnikoff in Spain in 1945? Was he actually killed or did he manage to escape?

The true story of Mendel Szkolnikoff has never been fully investigated, until now. After consulting over 6000 boxes of archives in 5 different countries, Pierre Abramovici is finally able to provide answers to these questions and reveal the truths behind the many myths that have surrounded this fascinating and complicated character.