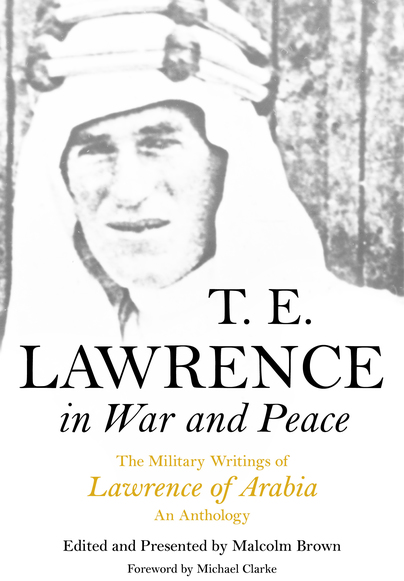 An Anthology of the Military Writings of Lawrence of Arabia

Add to Basket
Add to Wishlist
You'll be £14.99 closer to your next £10.00 credit when you purchase T E Lawrence in War and Peace. What's this?
+£4.50 UK Delivery or free UK delivery if order is over £35
(click here for international delivery rates)

• Offers a unique insight into Lawrence of Arabia through his formative writings • With material previously available only in limited editions • Compiled by the noted Lawrence scholar Malcolm Brown 'These wartime reports provide illuminating insights into aspects of Lawrence's enigmatic character which would later be suppressed as his darker side emerged in Seven Pillars of Wisdom' - Simon Courtauld in the Evening Standard The writings presented in this volume shed tremendous light, both on the character of T. E. Lawrence and the current situation in the Middle East. Despite being written more than seventy years ago, the thoughts of Lawrence of Arabia remain remarkably pertinent. This collection includes Lawrence's wartime reports from the desert, along with later writings in which Lawrence attempts to cope with the consequences of war in the circumstances of peace. Many of the pieces have previously only been issued in limited editions. T. E. Lawrence in War and Peace is an invaluable companion volume to Seven Pillars of Wisdom, which offers a self-portrait of its author long before he became an international celebrity. It gives us the man before the myth, writing fluently, vividly and with a total command of his subject. This edition has been compiled by the acclaimed writer Malcolm Brown, who is the co-author of A Touch of Genius: The Life of T. E. Lawrence and edited The Letters of T. E. Lawrence. The publication coincides with the 70th anniversary of Lawrence's death in May 1935 and an exhibition at the Imperial War Museum, which Brown curates.

Concentrating on the naval side of the Red Sea Campaign, this work for history
buffs and scholars describes the actions of T. E. Lawrence (Lawrence of
Arabia), the leader of the Royal Navy’s Red Sea Patrol during the Arab Revolt
of the WWI period. The book begins with background on the events and forces
leading to the Arab Revolt, then describes the actions of each ship of the Red
Sea Patrol, drawing on the deck logs of each individual ship. B&w historical
photos are included.

Lawrence of Arabia has been much written about and is still an enigma. This anthology is ably presented and sensitively edited. The result is a body of text, with rare illustrations. The secret and supplementary despatches offer up fresh perspectives. The story of Lawrence comes into fashion and then fades again, currently being in a fashionable period. This anthology will not only appeal to those interested in T E Lawrence but also those with interests in the history and development of the Middle East with its many contradictions and threats. An interesting presentation.