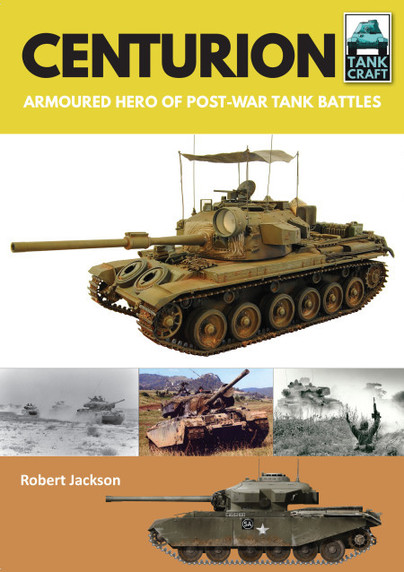 Click here for help on how to download our eBooks
Add to Basket
Add to Wishlist
You'll be £4.99 closer to your next £10.00 credit when you purchase Tank Craft 14: Centurion. What's this?
Need a currency converter? Check XE.com for live rates

The fifty-ton British Centurion tank, developed during the darkest days of the Second World War, was designed to out-gun and out-perform the latest German tanks, such as the formidable Panzer V Panther. It was one of the most successful tanks ever produced, and this volume in the TankCraft series by Robert Jackson is the ideal introduction to it.

The Centurion came into service too late to test its ability in action with German armour, but in the post-war world it earned a fearsome reputation in action during the many conflicts of the Cold War era, from the Middle East to Vietnam. Nearly 4,500 were built, serving with the armies of some twenty nations. The Centurion’s chassis was also adapted to fulfil a variety of tasks, including armoured recovery, bridge-laying and guided weapons carrier.

As well as tracing the history of the Centurion, Robert Jackson's book is an excellent source of reference for the modeller, providing details of available kits and photographs of award-winning models, together with artworks showing the colour schemes applied to these tanks. Each section of the book is supported by a wealth of archive photographs.

This book will prove invaluable for model makers building many of the different marks of the Centurion. The numerous photographs of the various different versions tell the story of this iconic tank and the colour illustrations are well presented and the completed models show cased are inspirational.

Robert Jackson’s text is both authoritative but easy to read. Highly recommended to model makers and historians interested in the Centurion.

Jackson writes with the knowledge of one who has researched his topic well and has also served his country. His book contains some excellent photos and is put together in the same style as many other Tank craft books. Although no tank expert myself, I enjoyed reading this book and found it gave an interest in insight into the development of what became the Tank for it's time.

... another fine introduction to a subject and highly recommended if you're planning to add a Centurion to your collection.

My genre is World War II and the Centurion came out too late to see any action during the war. However, it did serve valiantly in many theatres of war thereafter including Korea, Vietnam, and the middle east. Robert Jackson does a great of bringing it all together in this inciteful installment in the Tank Craft series.

This book will prove invaluable for model makers building many of the different marks of the Centurion. The numerous photographs of the various different versions tell the story of this iconic tank and the colour illustrations are well presented and the completed models show cased are inspirational.
Robert Jackson’s text is both authoritative but easy to read. Highly recommended to model makers and historians interested in the Centurion.

This is a good book on the Centurion tank is well written and has some very nice photographs.

Gamers will find this book a useful reference, painting guide, and inspiration for scenarios.

A useful guide to the Centurion tank for modellers.