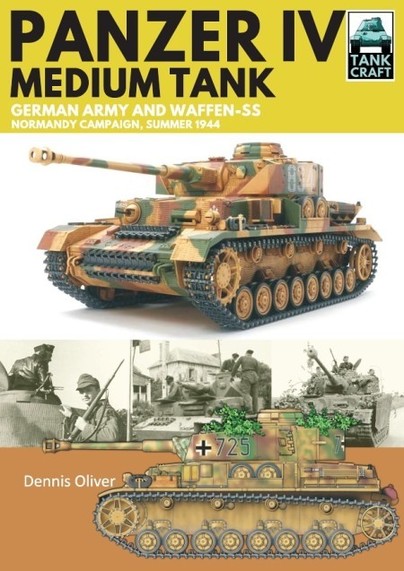 Add to Basket
Add to Wishlist
You'll be £11.89 closer to your next £10.00 credit when you purchase Tank Craft 35: Panzer IV, Medium Tank. What's this?
+£4.50 UK Delivery or free UK delivery if order is over £35
(click here for international delivery rates)

Order within the next 2 minutes to get your order processed the next working day!

When the Allied armies landed on the Normandy beaches on 6 June 1944 the backbone of the armoured reaction force awaiting them was made up of 758 Pzkpfw IV tanks, a number which represents almost half the fully-tracked vehicles available for the defence of the West. The first models of these tanks had entered service in November 1937 and although replacements had been considered, the original design was continually up-gunned and up-armoured. Perhaps lacking the glamour of the Panther and Tiger, the most recent variant, the Pzkpfw IV ausf H, was at least the equal of the best British and American tanks. Drawing on official documentation and unit histories Dennis Oliver investigates the formations that operated these deservedly famous vehicles and uses archive photos and extensively researched colour illustrations to examine the markings, camouflage and technical aspects of the Pzkpfw IV tanks that served on the Western Front during the critical summer of 1944. A key section of his book displays available model kits and aftermarket products, complemented by a gallery of beautifully constructed and painted models in various scales. Technical details as well as modifications introduced during production and in the field are also examined, providing everything the modeller needs to recreate an accurate representation of these historic vehicles.

This volume covers the Panzer IV in Normandy in the usual meticulous detail that is the hallmark of Dennis Oliver's Tank monographs. Sumptuous colour photographs of kits by expert modellers, and colour side profile artwork provide inspiration for the AFV modeller. The author has made a close study of contemporary photographs to differentiate the different marks and variations of the Panzer IV in theatre, tying the photographs to individual units where possible.


Of interest to wargamers and military historians, is the introduction with an operational level map showing the seven tank divisions in Normandy, with a timeline of significant events as they affected the Panzers. Brief unit histories set the equipping and operational use of the Panzer IIs in context, together with tables of issue and orders of battle. Oliver will state reliably where he is not certain of details that are open to interpretation.


In summary, a very useful book for wargamers and modellers interested in this Wehrmacht workhorse.

So far Panzers III and IV are very under represented un the Tank Craft series, compared to the Panthers and Tigers. So not only is this a great addition to this series, but I hope it’s the first in a series that redresses that imbalance!

This book Panzer IV focuses on the latter part of the war from D-Day onwards. Although this series of books is primarily aimed at model crafters, the actual history, technical detail and chat about specifications is excellent so these books should never be seen as just for model makers.

The author confines his attention in this volume to the operations of the Panzerkampfwagen IV, Ausführung H, concentrating on the period of 6th July to 21st August 1944 providing a chronology of action of the units involved, production and allocation charts and maps of approximate locations for their action in Normandy. He discusses the new Gliederung (structure) of those forces with their new allocations of armour. He packs a lot in the 64 pages. It's primarily an enthusiast's and scale modeller's reference with 50 black and white photos, 9 charts, and 22 pages of modelling references to include 20 colour side views of the Panzer IV. Enpictured are some superb models made by James Nigel Panaganiban, Theodoros Kalamatas, Yvan Garnier and Konstantinos Kalogeropoulos. There are some interesting photos with many details labeled, which I found interesting. This will ultimately be part of a series of references on the Panzer IV.

This is another lovely addition to the TankCraft series, which is aimed primarily at armour modellers, along with some useful background history to the tanks and units that took part in the Normandy campaign of 1944, so bound to be popular I think.

"A very comprehensive coverage of the German units using Panzer IVs during the Normandy campaign, with plenty of detailed photos, color profile drawings with descriptions of the specific tank and unit..."