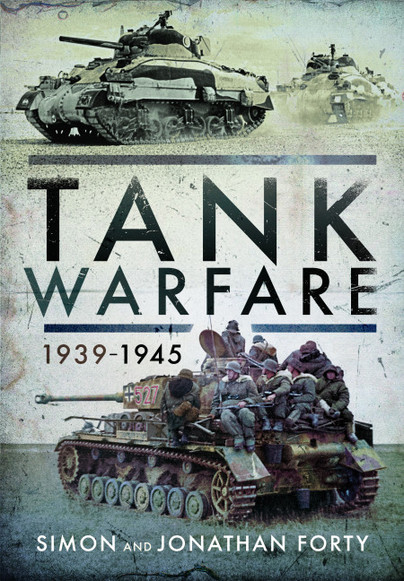 On the battlefields of Europe and North Africa during the Second World War tanks played a key role, and the intense pressure of combat drove forward tank design and tactics at an extraordinary rate. In a few years, on all sides, tank warfare was transformed. This is the dramatic process that Simon and Jonathan Forty chronicle in this heavily illustrated history.

They describe the fundamentals of pre-war tank design and compare the theories formulated in the 1930s as to how they should be used in battle. Then they show how the harsh experience of the German blitzkrieg campaigns in Poland, France and the Soviet Union compelled the Western Allies to reconsider their equipment, organization and tactics – and how the Germans responded to the Allied challenge.

The speed of progress is demonstrated in the selection of over 180 archive photographs which record, as only photographs can, the conditions of war on each battle front. They also give a vivid impression of what armoured warfare was like for the tank crews of 75 years ago.

The contrast with WW1 is amazing, when tank warfare was in its infancy. Simon and Jonathan Forty provide a comprehensive guide to tank warfare, and the well-chosen photographs are absolutely fascinating. It's horrific to think that men designed bigger, better and more powerful machines with which to kill their enemies, but this is military history at its very finest.

With this book, many little-known aspects are examined and I am sure that even someone who has dozens of books on the subject will find it interesting to own this in the book by Simon and Jonathan Forty.

The tank is now getting close to being obsolete lasting for just over a hundred years as master of the battlefield. This book is about the tank and tank warfare from 1939 to 1945. This was the pinnacle in development, use, variety and numbers. Here we have a super insight into that period. Both theory and practice are covered using original reports on actions, training documents for large and small tasks and units, technical instructions for a wide range of topics. There are useful comparisons, many shown diagrammatically, between weapons and tanks of different nations. Anti-tank weapons and actions are also covered.
A comprehensive glossary, an extensive bibliography and lots of relevant photographs aid the reader’s understanding and enjoyment.
There are many books about all aspects of tanks and their battles but this book is made special because of the amount of contemporary material reproduced here without the clutter of ‘wisdom after the event’.
We highly recommend this work to all levels of readers with an interest in the tank.

What impressed me most with this book was the varied information the Forty brothers provided and the succinct style they've used. In the 6 chapters and 9 appendices they discuss tactics, doctrine, and development of tank warfare in WWII. It's 208 pages provide an interesting read with each chapter accompanied by photos, 157 all told along with 35 drawings. The chapters cover the European, African and Pacific theatres, each with a chronology of events outlining the successes and failures of those campaigns. The appendices cover "Tank Guns, Gunnery and Ammunition", "Antitank Warfare", maintenance and recovery, "Bridging and Bridgelayers", a casualty survey, tank and SP production and more, much more. They expound in each appendix and the book if filled with all kinds of information I've not seen before, certainly in one place. It was a pleasure to read and will be referred to often.

This book is a fantastic volume of information if you’re into your tank warfare, right from the start it really does supply in great detail what an avid fan would want to read. In many ways we see how the tank had to develop during the interwar period by all nations it seemed, with some countries coming up with their own designs to some just blatantly copying what worked. The facts and information supplied in this book seem second to none and really give the book that authentic touch of class to be used as a book to go to. The book contains numerous photographs which add weight to the story of development, you’re not getting a book of photographs you’re getting a book of quality information and facts. For all those techie junkies out there, you won’t be disappointed at all as the last quarter of the book has an excellent Glossary, Appendicles and Bibliography. If its tanks you want this has got to be the book, I thoroughly enjoyed this book and would give it a 5 star rating, the best book I’ve read on tanks in a long while.

This really is a ‘go-to’ book for anybody wanting a comprehensive overview (if that’s not an oxymoron) of everything related to tanks in WW2. Compelling reading.