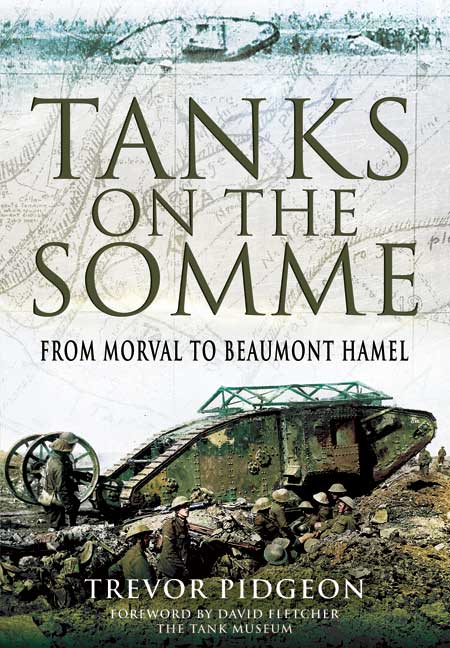 Tanks on the Somme (Hardback)

From Morval to Beaumont Hamel

Add to Basket
Add to Wishlist
You'll be £19.99 closer to your next £10.00 credit when you purchase Tanks on the Somme. What's this?
+£4.50 UK Delivery or free UK delivery if order is over £35
(click here for international delivery rates)

On 15 September 1916 during the Battle of the Somme, tanks - one of the decisive weapons of twentieth-century warfare - were sent into action for the first time. In his previous books Trevor Pidgeon, one of the leading authorities on the early tanks, has told the story of that memorable day, but only now has his account of later tank operations during the Somme battle become available. In this, his last work which was completed shortly before he died, he reconstructs the tank actions that took place between late September and November when the Somme offensive was closed down. His account gives a vivid insight into the actions and experiences of the tank crews, and it shows the appalling dangers they faced as they manoeuvred their crude, vulnerable and unreliable machines towards the enemy. His book will be essential reading for anyone who is familiar with his previous studies of the subject and for anyone who wants to follow in the tracks of the tanks as they lumbered across the battlefield nearly 100 years ago.

" An interesting book that fills an important part of the gap that still surrounds the early stages of the Great War."

Please note: This is a Spanish review - A translation option is on the link provided.

For anyone with an interest in tanks, the Great War, and indeed, history in general, this is a fine and useful read, especially with its impeccable research.

The authors final work on the history of tanks of The Great War will be essential reading for anyone who is familiar with his previous studies of the subject or who plans to visit the Somme and wants to follow in the tracks of those tanks.

I would commend this title unreservedly to students of the First World War; for anyone wishing to follow tank operations on the ground, but yet more. If you wish to see an example of superlative research, read this book. The study of military history can accomodate the professional academic and the dedicated enthusiast. Mr Pidgeon may have been a so-called 'amateur' but showed a mastery of subject and material which ranks with the professionals.

After their first dramatic appearance on the Somme battlefields the surviving Mk I tanks were used in small numbers to support a series of minor operations designed to capture individual German lines or strong points. This book examines each of those operations, completing a picture of the tank's earliest military operations that was begun in the same author's examination of that first attack.

As the author states in his introduction, this book is probably not for the general reader. It focuses in great detail on some very small scale actions, tracing the actions of individual tanks as they took part in 'penny packet' operations, following the routes taken by each tank, the impact each had on the fighting, and the eventual fate of each tank.

If not the general reader, then who is this book aimed at? Anyone interested in armoured warfare, especially its origins and early battles will find this book very valuable. The same will be true for anyone with an interest in the battle of the Somme - Pidgeon's detailed accounts of these small scale tank battles are a valuable addition to the literature on that great battle. The book should also be of value to anyone tracing ancestors in the tank corps - not because of any inclusive list of personnel, but because of the detailed accounts of the actions they might have been involved in.

This is an impressive piece of work, containing some skilled historical detective work as Pidgeon picks his way through the available evidence to produce his accounts of the first tank battles.

In this highly descriptive book, the author has applied his trademark brilliance in bringing the minutest, mostly un-published, facts to paper. For clarity, he tackles each of the dozen or so tank actions; Guedecourt, Martinpuiche, Le Sars, Thiepval, Ancre, etc separately.

This book, which concentrates on that handful of early machines and young crews struggling to prove themselves in the face of oft-scepticism and daunting odds, fills perfectly the gap in the history of the early tank actions. Trevor Pidgeon's impressive work gives a very detailed and clear insight into the extreme difficulties they faced. Tanks on the Somme is a must for the tank history enthusiast and for the same reasons it will be welcomed and enjoyed by the general Great War reader.

The First World War continues to hold a fascination for military historians, and the tanks and fighting vehicles are particularly fascinating to some. The new book by Trevor Pidgeon, with foreword by David Fletcher of the Tank Museum, looks at the various actions involving tanks that took place between late September and November 1916 when the Somme offensive was closed down. This account gives a vivid insight into the actions and experiences of the tank crews and it shows the appalling dangers they faced as they manoeuvred their crude, vulnerable and unreliable machines towards the enemy across a battle scarred landscape pock marked with craters left by the constant artillery barrages. While primarily a written account, the book does contain a number of maps, diagrams and photographs to further illustrate these early tank operations on the battlefields of France.

On 15 September 1916, during the Battle of the Somme, tanks were sent into action for the first time. In this book the historian Trevor Pidgeon provides a detailed account of tank operations during the second phase of the Battle of the Somme, reconstructing the actions of individual tanks during each engagement. The book also features field walks of the sites of the major tank actions.

Tanks on the Somme is very much a book for enthusiasts, providing ample detail.

Tracing the role of tanks in Fourth and Reserve Armies during the first phase of the Somme, Tanks on the Somme provides a detailed historical narrative of the battles.

A hundred years ago, on 15 September 1916, on the Western Front during the Battle of the Somme, the tank made its debut on the battlefield. The first tanks were crude, unreliable, vulnerable weapons, but they changed the character of land warfare forever, and Anthony Tucker-Jones's photographic history of these pioneering armoured vehicles is the ideal introduction to them. In a selection of over 150 archive photographs he offers a fascinating insight into the difficult early days of this innovative new weapon, describing its technical history and its performance in combat. While the Battle of…

Click here to buy both titles for £30.99
More titles by Trevor Pidgeon