August 1914. Flags waved, people cheered and armies mobilized. Millions of citizens throughout Britain responded to the call-to-arms. War fever was contagious. In the far reaches of the British Empire, too, ‘determined colonials’ pledged their allegiance and prepared to serve their King. Amongst the patriots who joined the colours were thousands of schoolmasters and trainee teachers. In London, students and alumni from the London Day Training College left their classrooms and ‘took the King's shilling’. In the Dominions, hundreds of their professional counterparts in Perth, Auckland and Toronto similarly reported to the military training grounds, donned khaki uniforms and then embarked for the ‘old county' in its hour of need. Teachers at the Front, 1914-1919 tells the story of these teacher-soldiers. It recalls the decisions made by men who were united by their training, occupation and imperial connections, but were divided by social and geographical contexts, personal beliefs and considered actions. It follows them as they landed on the beaches of Gallipoli, attacked across no man's land in Flanders, on the Somme and at Passchendaele, and finally broke through the Hindenburg Line and secured victory. Many did not survive the carnage of what became known as the Great War. For those who did - wartime officers and men who had been proud to call themselves Tommies, Anzacs, Enzeds and Canucks - returning home presented further challenges and adjustments. This is a book based upon extensive research and an eclectic body of source material. Detailed and powerful narratives of individual lives combine to illuminate the confluence of grand strategies and personal circumstances in times of war.

"This is a well written and easy to follow book."

As featured on the Western Front Association podcast! Listen here.

"...highly recommended for anyone interested in the specific subject as well as those who wish to learn more about the social and educational make up of British and Commonwealth forces in the Great War."

I enjoyed this book and the mini-biographies of the teacher soldiers that were written about. The research is thorough and engaging, and offered the right amount of context to understand the subject. And I loved that different nationalities were covered.

A researched in-depth topic that reveals the rich and varied Great War experiences and lives in the military of these men and women - soldiers, sailors, and airmen - who had previously followed the teaching profession, together with a unique view of significant wartime events.

Essex Branch of the Western Front Associaion, May 2021 Newsletter

Overall this is a another important book which opens up new route of research into the varied backgrounds of those who served in the First World War. It is hard to contemplate the thoughts that went through these men's minds, as they gave up the daily commitment of teaching youngsters, to joining up and 'doing their bit'.

Barry Blades's new book reinforces the stoicism and bravery of Britain's schoolteachers who joined up and went off to war, many of them never to return. A brilliant, moving book.

This book has been well written and I found the writing to be really good and enjoyed what I felt was a bit of a ‘punchy’ style. I really enjoyed this book and would recommend it to all, you don’t have to be in the teaching profession to enjoy it.

Teachers at the Front tells the story of teachers that fought in the Great War (now known as World War I) all throughout the Commonwealth. It was an interesting part of history that is just now getting full recognition. It was interesting to learn about the evolution of teacher-training before and after the war for both men and women. It told what happened to these teachers before and during the War, and if they survived, after the War. I enjoyed learning about a part of history in which I am unfamiliar with. This book would be perfect for history buffs, especially those that have interest in the World Wars.

Article: ‘West Norfolk author looks at teachers in wartime’ as featured by

The book followed the individual teachers in a very interesting way with plenty of background information. I kept going back looking for the abbreviations until I found the page at 209 which indexed them all. I thoroughly enjoyed the background and history of the individuals, this brought the book to life.

Dr Barry Blades is an independent researcher and writer, with a particular interest in the relationship between war and society and the impact of conflict upon individuals and their communities. Barry approaches his work as both a historian and as a professional educator. He taught History in secondary schools in London and Peterborough for over thirty years, and undertook a variety of senior leadership rolesin education as a headteacher, school governor, inspector and consultant. His first book, Roll of Honour: Schooling and the Great War, 1914-1919 (Pen & Sword, 2015) looks at how children and teachers in British schools were affected by the First World War, and how they in turn supported the national war effort. Teachers at the Front, 1914-1919 (Pen & Sword, 2020) develops further the story of teacher-soldiers from British and Dominion teacher training colleges who fought and died in the conflict. 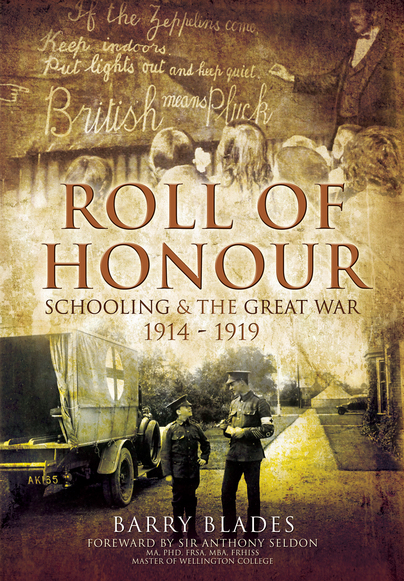 The Great War was the first ‘Total War’; a war in which human and material resources were pitched into a life-and-death struggle on a colossal scale. British citizens fought on both the battle fronts and on the Home Front, on the killing fields of France and Flanders as well as in the industrial workshops of 'Blighty'. Men, women and children all played their part in an unprecedented mobilisation of a nation at war. Unlike much of the traditional literature on the Great War, with its understandable fascination with the terrible experiences of Tommy in the trenches, Roll of Honour shifts our…