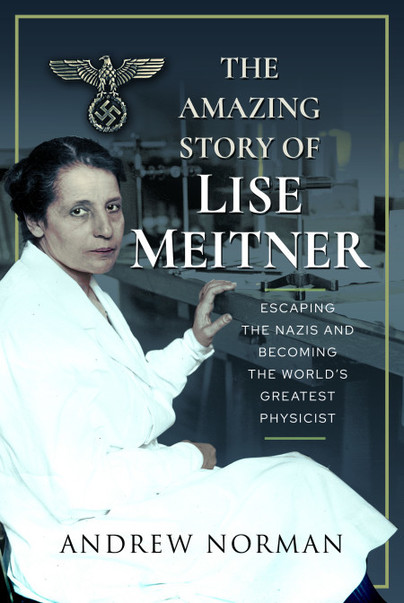 Add to Basket
Add to Wishlist
You'll be £20.00 closer to your next £10.00 credit when you purchase The Amazing Story of Lise Meitner. What's this?
+£4.50 UK Delivery or free UK delivery if order is over £35
(click here for international delivery rates)

The author is fortunate and honoured to have been granted several interviews with Lise’s nephew Philip Meitner – himself a refugee from the Nazis – who with his wife Anne, provided much valuable information and many photographs.

I admit to watching a programme about Lise Meitner a few months ago, and what an extraordinary story and life she had. Meitner who was a physicist, but she had two problems at the time, he was Jewish and she was a woman. Had she just been given the recognition she deserved then she could probably have achieved so much more. This book is fascinating to read and so well written. If you live in the scientific world you’ll probably get a lot out of it, but she is certainly a fascinating woman. An excellent book that doesn’t get too scientific but makes for a very good read.

As seen in the Cambridge Independent

A woman who should have, but did not, received the Nobel Prize, Meitner researched alongside the great names of science. Her personal tale is genuinely epic. An important name in science.

This superb biography of an outstanding scientist is well written with black and white illustrations and an index and serves to remind us all of her remarkable life lived with honesty, integrity and dignity as well as her numerous scientific achievements. The characters portrayed in the book and her collaborators and scientific contemporaries are a who’s who of important scientists of the first half of the twentieth century and reading this book was an informative, humbling and inspiring experience.