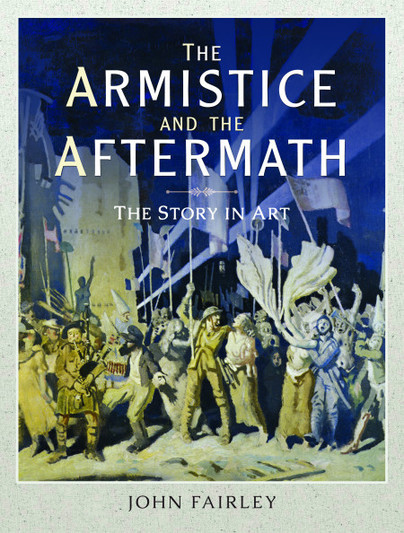 The Armistice and the Aftermath (Hardback)

Add to Basket
Add to Wishlist
You'll be £18.00 closer to your next £10.00 credit when you purchase The Armistice and the Aftermath. What's this?
+£4.50 UK Delivery or free UK delivery if order is over £35
(click here for international delivery rates)

Armistice Day in 1918 was arguably the most joyous day of the 20th century. As the guns fell silent, crowds celebrated across the Western world.

The foremost artists of all nations including Pierre Bonnard in Paris and Gilbert Beal in New York, were inspired to convey the emotions of this historic moment. The Irish painter William Orpen was in Amiens.

The tense and difficult process of making the peace ensued. Orpen and Augustus John were assigned as official artists at the Versailles conference. Painters also recorded on canvas the extraordinary closing events of the War, including the surrender of the entire German battle fleet.

One hundred years on, The Armistice and the Aftermath brings together, in one book, a superb collection of the most epic paintings of the era. The result, with informed and perceptive commentary, is a unique record of those momentous days which not only re-drew the world map but, more ominously, shaped the future of the 20th Century.

The Armistice and the Aftermath which showcases the most breathtaking paintings of the era, capturing moments that changed the world forever. Each painting is given a full page, followed by an insightful commentary about the event each piece of art is a response to. It really is a beautiful record of the artistic responses to the closing moments of one of the most astonishingly brutal conflicts the world had seen up until that point.

The author provides a lively, insightful commentary on the end of the War against a backdrop of striking full colour images in various mediums; pen and wash, oil, watercolour and photographs, with notes on the artists. We learn, for example, that Augustus John, recruited by Lord Beaverbrook as Canada’s official war artist, commented that the Peace talks at Versailles “held no pictorial possibilities” and therefore his main artistic endeavours during the Conference were focused on the ladies recruited to entertain the guests! Works by most of the well known artists of the day; Nash, Orpen, Maxwell, Muirhead Bone and Nevinson are included. A beautifully illustrated coffee table style book which will appeal to art lovers.

As the focus of this volume is on art, the works appearing within its pages are likely to be of interest to aficionados of such matters, while Historians and ‘Generalist’ readers with an interest in World War I may also find it of interest. As they portray contemporary military machinery, it is also possible that military modellers might find some of the images useful as reference material.

Interview article, 'Malton-based author John Fairley's new book explores how the First World War and the Armistice were depicted through art' as featured by

I am riveted. Absolutely fascinating and captures the spirit of the moment wonderfully, along with the geopolitical impact. The paintings are so evocative - they bring one into the heart of the war, its impact and aftermath at a very human level.

As featured in 'Top 5: Pick of the best books'