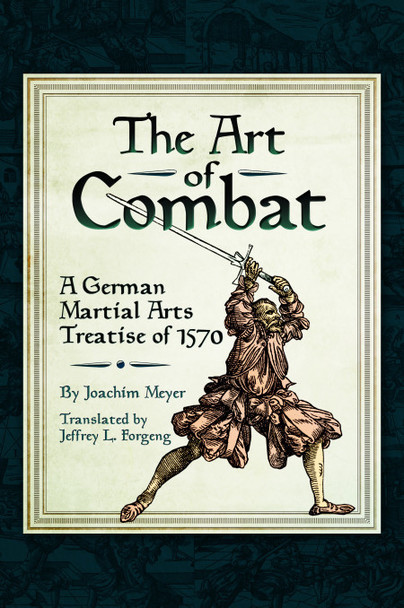 The Art of Combat (Paperback)

A German Martial Arts Treatise of 1570

Add to Basket
Add to Wishlist
You'll be £19.99 closer to your next £10.00 credit when you purchase The Art of Combat. What's this?
+£4.50 UK Delivery or free UK delivery if order is over £35
(click here for international delivery rates)

First published in 1570, Joachim Meyer’s The Art of Combat is among the most important texts in the rich corpus of German martial arts treatises of the Middle Ages and Renaissance.

Meyer is unique in offering full recommendations on how to train for various weapons forms. He divides his book into five parts by weapon types: longsword; dusack (a practice weapon analogous to a sabre); rapier; dagger; and staff weapons. For each weapon, Meyer lays out the principles of its use and the vocabulary of techniques, and then describes a range of specific ‘devices’, attack combinations for use in combat. This rational approach, along with Meyer’s famous and profuse woodcut illustrations, make this a crucial source for understanding the history and techniques of medieval and Renaissance martial arts.

Overall, I liked this a lot. This is good for anyone interested in historical warfare, martial arts, German history, or cultural changes in weapon use. This is written at a time when martial arts are waning in favour of guns. Meyer was trying to preserve and promote what Meyer described as “the knightly and noble art of combat”. You can tell throughout this book how proud and honourable he felt his craft was and this book is the result of such a passion.

Reviewed by Michelle McMenamin on Goodreads

This classic treatise of armed combat stands the test of time, provides insight into Sixteenth Century combat and includes substantial introduction, with a detailed glossary of technical terms. Fascinating and highly recommended.

Experts agree that it is one of the best existing treaties in relation to the German medieval martial arts, written with a vocation intention to expose techniques for their teaching.

A fascination, too little-known, and vividly illustrated volume, Meyer's Art of Combat is especially remarkable in its attention to fighting with halberds, pikes, and quarterstaffs. Military and cultural historians as well as those interested in stage combat will find it invaluable

A very good presentation of Meyers work. I highly recommend to anyone looking to study renaissance combat.

This very interesting contemporary renaissance martial arts book shows a step in the development of medieval fighting arts to fighting for sport. Only the section on the (cut and thrust) rapier is intended for 'serious' fighting. The longsword, dussack and halberd, knife and pike sections are for 'sparring for sport'. As such it is a very interesting book which demonstrates George Silver's statement that fight school masters teach no thrust and rapier school masters teach no cut.
As modern Western Martial Arts enthusiasts fight for sport and not in a life and death situation it may be thought that this style of fighting would suit them well. On the other hand they may feel that the lack of thrusting in the longsword section (the main section) leaves a gap which is better filled by the medieval manuals which exist.
I am not aware of any other contemporary manuals that deal with the dussack and this section is especially valuable for that reason.
On the whole a very interesting book which shows how the medieval style of fighting was changing into a sport during the later 16th century.