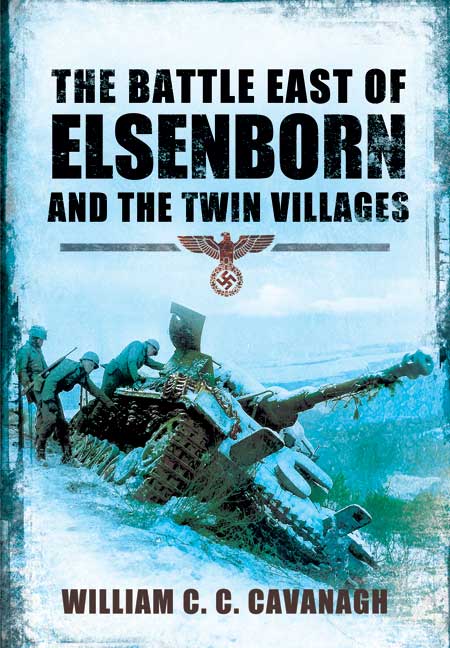 The Battle East of Elsenborn (Kindle)

Click here for help on how to download our eBooks
Add to Basket
Add to Wishlist
You'll be £4.99 closer to your next £10.00 credit when you purchase The Battle East of Elsenborn. What's this?
Need a currency converter? Check XE.com for live rates

This book tells of the courageous story of men who believed in their heritage, and who, through their heroic teamwork and dedication, stopped the main effort of the German Sixth Army. American veterans who participated in this battle remember the events, even after sixty years, as only yesterday. They also remember their compatriots and friends who died in this battle. The book covers what is essentially a five-day critical battle for the North shoulder of the 'Bulge' at Rochearth-Krinkelt. The Bulge was fought was fought in many areas, but it was won for the First Army on this shoulder.

The author, has probed into every possible source for factual information. He has studied official after-action reports, histories and unit reports of organisations involved in the battle. In addition, he has conducted an extensive program of individual contacts, not only with the US Army participants, local villages and resistance fighters, but also with German commanders at various levels in the 3 divisions involved. Such an ample and widespread research effort has enabled the author to separate fact from fiction.

This book focuses on the fighting in the north, where the Sixth S.S Panzer Army (Dietrich) was meant to advance to the Meuse at Liege and make the crucial break through that would allow the Germans to reach Antwerp and cut the Allied lines in half. In a series of hard-fought defensive actions a series of outnumbered and often under-strength American units managed to delay and then stop ‘Sepp’ Dietrich’s advance and his army never got past the Elsenborn ridge. The American stand in this area forced the Germans to move their ain effort further south and played a major part in the early failure of the entire Ardennes offensive.
This book thus looks at a crucial part of the wider battle of the Bulge. Each element of the fighting east on the northern flank of the battle is covered in great detail, with good use of both American and German sources.

The Battle of the Bulge continues to fascinate academics, soldiers and battlefield tourists alike. This well written volume follows the Sixth Panzer Army, led by Gen Josef “Sepp” Dietrich, through the Ardennes. The narrative charts the campaign chronologically, viewing the fighting through the eyes of the American units in the path of the German advance. The combination of the author’s intimate knowledge of the ground and the operation make this an ideal introduction to Hitler’s last throw of the dice in the West.

The Battle of the Bulge is commonly associated with the courageous defence of Bastogne, yet there were many other forces who had a hand in resisting Hitler's last offensive in the west. Amongst these was the untried and inexperienced 99th Infantry Division, on whom a large part of the initial onslaught fell. The Germans had hoped to brush them aside and drive deep into the rear areas of the 1st US Army, however the 99th Division sufficiently recovered from the hammer blow to resist tenaciously, gradually yielding ground as they struggled to hold the sheet weight of force being directed against them. William Cavanagh presents a comprehensive day-by-day study of the events on the front of the 99th Division and their neighbours, including the veteran 2nd Infantry Division, describing the numerous resolute defensive actions which succeeded in sapping the momentum of the German attack until, on the Elsenborn ridge, it was finally brought to a halt. This book sheds light on a chapter of the Ardennes offensive which has not received as much attention as it should, for it was here that the battle in the 1st Army's sector was decided.

First published in 1986, this well-written account tells the story of the men who stopped the German Sixth Army. American veterans recount the German assault against the US 99th Infantry Division as they tried to break through and seize the vital port of Antwerp. The book covers a five-day battle of the north shoulder of the ‘Bulge’ at Rochearth- Krinkelt. A must read – 10/10

This new book from Pen and Sword examines the role of Joseph ‘Sepp’ Dietrich’s sixth Panzer Army in the massive German winter counter-offensive. Hitler tasked Dietrich with taking on the positions of the US 99th Infantry Division, the plan being to reach deep inside Allied-held territory and seize the vital part of Antwerp. In the event this daring and somewhat desperate counter-attack failed, but it was a close run thing and this book tackles the twists and turns of the offensive from a number of different directions. All in all an interesting and gripping read.

The author has spent years researching this battle and his work is outstanding. Not only does he refer to the high level of direction of the battle but he brings the fighting home and makes you feel as if you were personally there.
The book focuses not only on the Corps and Divisional level but it also brings the reality of the front line to life.
This interesting and exciting book details the events on a daily and unit basis. It is also very consuming and the author’s style makes you never want to stop reading it until you reach the end. One can only say that his research is exceptional and for all those interested in this campaign/ Battle of the Bulge then this book is a must have as well as essential reading.

William Cavanagh must be commended for his superb telling of a WW2 battle that is less known about than the battle of Bastogne and yet is probably of equal importance to the allied success story.

His knowledge is obviously quite comprehensive and his access to first hand accounts and archive material offers o some really stunning photographs.
This book will have huge appeal to those with a strong interest in US operations in north-west Europe and to a general reader who appreciates strong personal accounts.

I first read this book back in the early 90â€™s, though under a slightly different title than this present Pen & Sword reincarnation. What isnâ€™t different is the rather franticly paced & action filled narrative, which at times could have you believing you are reading a novel. Thatâ€™s not to the detriment of the book, but more an acknowledgement of the authorâ€™s highly descriptive grammar, and the research he undertook with both military and civilian participants alike.

This book charts a 7 day period in the lives and tribulations of the American 1st, 2nd and 99th Infantry divisions, as they strive against man & nature to hold exposed positions, in the face of a committed and desperate enemy. The enemy in this instance are the fanatical Waffen SS, along with the variable flotsam that the late war Volksgrenadier divisions brought together. The German push along the northern shoulder of what was to become known as the Battle of the Bulge, was one of the most bitterly contested areas, in this the last major German offensive on the western front in December 1944. The fighting here was as bad or if not worse as anything seen in and around the famous siege of Bastogne further to the south.

The book is heavily illustrated with many unseen pictures, and air recce photographs, which help you, paint a vivid picture of the unfolding story. Though only 188pages long, its packs a big punch and one easily packed for the commute to and from work.