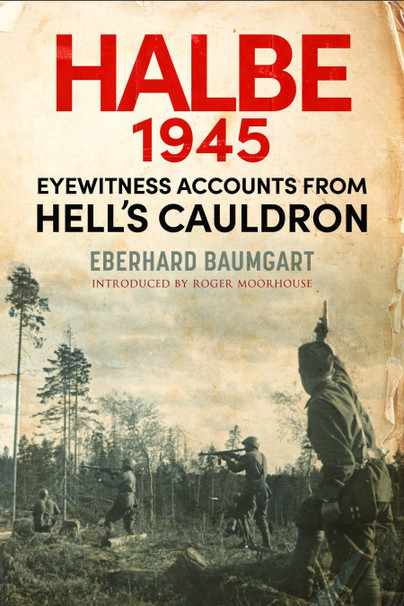 "...provides important and informative insights into this devastating and little-known aspect of World War II history."

This book reveals the story of German troops being forced to withdraw from advancing Russian troops who had almost encircled them at the small town of Halbe in 1945. The battle was colossal and the number of soldiers who died was around 30,000 Germans & 20,000 Russians, and on top of that were thousands of German civilian casualties. This book which has been translated into English for the first time gives an excellent if harrowing retelling of events that occurred. With the writer relying on a number of accounts from men who were there. This was a fascinating read, of a story I had never really heard about before. The fighting and stories were staggering and I found it astonishing that I had not heard of this before. The story was a well written but easy to read the story, and there is a good number of photographs dotted throughout the book. I would highly recommend this book in which the Germans suffer an enormous onslaught from a Russian army.

These accounts do, however, provide a series of remarkable descriptions of the desperate struggle that took place. There is also an interesting account of the immediate aftermath of the battle.

It’s an excellent book, translated into English for the first time, and a story that must be told, as it has particular relevance to events in Ukraine and the fate of Ukrainian citizens at the moment.

A sobering detailed account populated by eyewitness accounts of those Germans who were in the chaotic battle and attempt to escape the Soviets. Also some interesting accounts of the aftermath under Russian control. The compilation of eyewitness accounts cleverly allows repetition of events so that the story reflects the confusion and the way that witnesses can see the same event differently. The supporting images are good and ordinarily I would bemoan the absence of maps. In this case the utter confusion of the battle renders maps unnecessary and the narrative tells the story of the frightened confused participants with great empathy and engagement. Halbe – the “largest burial ground in all of modern Germany’s history”.

Click here to buy both titles for £45.00
More titles by Roger Moorhouse