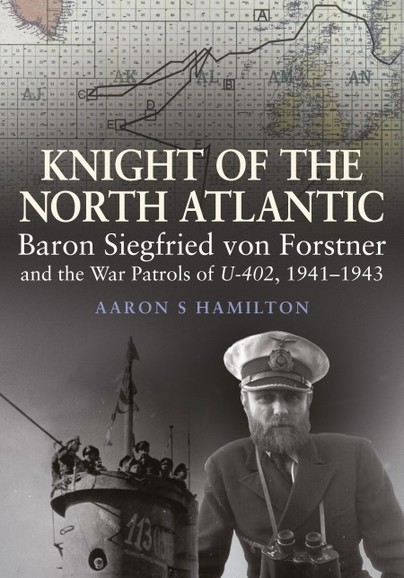 Knight of the North Atlantic (Hardback)

Add to Basket
Add to Wishlist
You'll be £25.00 closer to your next £10.00 credit when you purchase Knight of the North Atlantic. What's this?
+£4.50 UK Delivery or free UK delivery if order is over £40
(click here for international delivery rates)

As World War II recedes further into the past, still each year hundreds of new books are published about some aspect of this global conflict. Many offer new insights from recently declassified documents. Other’s look to re-interpret what was thought to be well understood events. This book is no exception. The history of U-402, a Type VIIC German U-boat, is another tile in the mosaic of the war, and more specifically the Battle of the Atlantic.

U-402’s conning tower was emblazoned with the shield of its sponsoring German city of Karlsruhe. Upon that shield was the Latin word ‘Fidelitas’ – Fidelity – and Baron Siegfried Freiherr von Forstner, the U-boat’s captain, embodied that word through his deep sense of loyalty to his profession, country, and crew. Born of an aristocratic military family, with a tradition of U-boat service, von Forstner served without the pretentiousness of title, even after winning the Ritterkreuz (Knight’s Cross). He fought the war like a knight of old, with a defined code of chivalry, as he duelled with escorts, went to the aid of fellow U-boats, and rescued his enemy from the sea. As the North Atlantic battlefield grew deadlier with each successive patrol, von Forstner remained focused on his duty to sink Allied tonnage while keeping his crew alive. His daring and conduct at sea captured the respect of Captain, US Coast Guard (Ret) John M Waters, who was a Watch Officer onboard the escort USCGC Ingham that fought U-402 in several convoy battles. After the war, he became the unexpected chronicler of his former enemy, and established an enduring friendship with von Forstner’s family.

The story of von Forstner and U-402 parallels the rise and fall of the Wolfpack, and reflects the ebb and flow of the Battle of the Atlantic from the early operations in European waters, to Operation Paukenschlag (Drumbeat) off the US East Coast, to the climatic convoy battles of the North Atlantic in 1943. This is a truly gripping account of the Atlantic conflict, and the large selection of photographs adds a realism and authenticity found in very few accounts of the U-boat war.

Hamilton succeeds in making von Forstner and the crew of U-402 real people with whom we can empathise, and the final section of the book – a dive onto the now peaceful and overgrown remains of one of U-402’s victims – is a fitting conclusion to the story and reminder, if one were needed, of the price of war.