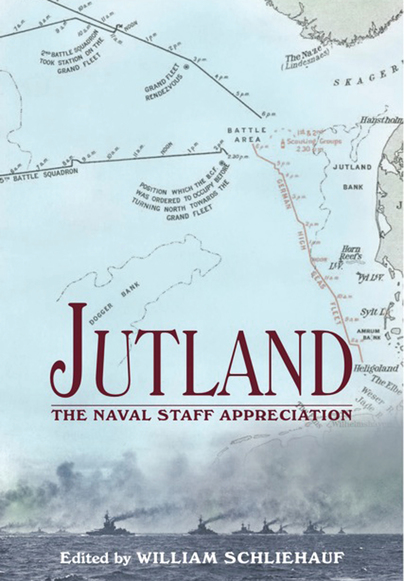 You'll be £25.00 closer to your next £10.00 credit when you purchase Jutland: The Naval Staff Appreciation. What's this?
+£4.50 UK Delivery or free UK delivery if order is over £35
(click here for international delivery rates)

Jutland, the largest naval battle of the First World War, was the most controversial engagement in the Royal Navy’s history. Falling well short of the total victory expected by the public, it rapidly sparked argument and ill-feeling within the Navy and disagreements among those in its most senior echelons, many of whom had been directly involved in the battle. The first attempt to produce even an objective record was delayed and heavily censored, but this was followed by a more ambitious scheme to write a no-holds-barred critique of the fleet’s performance for use in training future officers at the Naval Staff College. This became the now infamous Naval Staff Appreciation, which was eventually deemed too damaging, its publication cancelled and all proof copies ordered destroyed.

Mentioned in virtually every book on Jutland since, but unavailable to their authors, it has developed the almost legendary status of a book too explosive to publish. However, despite the orders, a few copies survived, and transcribed from one of them this long-hidden work is here revealed for the first time. Now everyone interested in Jutland can read it and judge for themselves, with an expert modern commentary and explanatory notes to put it in proper context.

The book contains a superb Afterward by the modern writers that shed light on much of the controversy. This Afterward is an excellent discussion of the battle and coupled with their editorial notes is the factual analysis that is missing from the Appreciation. While concise, the commentator/editors provide an easily read analysis for anyone who has a general interest in the movements in the battle.

The book is handsomely produced and well copyedited, the fifty-three diagrams – the work of John Jordan – are outstanding, and at a list price of £19.99 it constitutes excellent
value for money.

The International Journal of Maritime History, May 2017 - reviewed by John Beeler

This book is literally made from the stuff of legends...

... This will make it hard for the Jutland novice to weed his way through. But for veteran students of the Battle of Jutland, and the Jutland Controversy, this book is a must have.

This edition, complete with thorough editorial support, is essential for students of the Jutland debate. One of the best Jutland books of 2016.

Sets the record straight in a forensic but compelling read.

... This book is unique in being an updated presentation of a contemporary and highly contentious analysis of the battle, and the story of the NSA itself is certainly intriguing. If you collect Jutland literature then you will need this book.

This long-hidden work is now published, but with an expert modern commentary and explanatory notes to put it in proper context. Norman Friedman is a recognised authority on the strategic, technical and tactical aspects of the maritime environment.

Edited by William Schliehauf in full, with an index, bibliography, some additional papers and an introduction by Schliehauf. It is essential reading for anyone interested in the Battle of Jutland.

'excellent book' - 'I have no hesitation in recommending this book'.

Though hundreds of books about the battle of Jutland have been published over the last hundred years inevitably a fresh crop has been published to celebrate the 100th anniversary of the largest naval battle in history, involving over two hundred and fifty ships. The arguments continue to rage over the controversial battle; though the Germans lost in straight strategic terms they won the all-important propaganda battle. Adapting Fisher's famous dictum the German press..."hit first, hit hard and kept on hitting..." stoking intense debate and giving rise to endless controversy as to why Britain's beloved Royal Navy failed to annihilate the High Seas Fleet in true Nelson style.

Of the new books one of the best is Jutland, The Naval Staff Appreciation/. In 1920 the Director of Training & Staff Duties directed the Dewar brothers, Alfred (a founder of the Admiralty Historical Division) & Kenneth (a founder of the Naval Review) to prepare a staff appreciation of the battle. The result a year later was CB 0938 'Naval Staff Appreciation of Jutland' (NSA). The draft was banned and copies destroyed as it was considered too damaging. It was not until some thirty years later that copies eventually surfaced. As to be expected the Appreciation goes into the battle in great detail, painstakingly constructed from the host of reports, official accounts and staff papers. It was an attempt to analyse what went wrong and to be used in teaching at the Naval Staff College but it was biased being anti-Jellicoe and pro-Beatty and written without the benefit of German records. There are interesting sections such as the chapter spelling out the set back to the allied prosecution of the war by failure to destroy the German fleet (failure to control the Baltic flanks and block Scandinavian trade, or blockade the U-boat bases and limit the U-boat campaign). Overall this heavily edited account, redressing the errors and supported by many appendices, annexes and over fifty diagrams makes fascinating reading and well recommended.

... The editors, William Schleihauf and Stephen McLaughlin, have not only reproduced the NSA, complete with extensive Appendices and Annexes, but have provided objective critiques, based on their own forensic research, to offer a valuable addition to the lore of Jutland. Their contribution includes an extensive Introduction backgrounding the NSA and its contemporary setting, a ‘Cautionary Note’, ‘a Few Basics’ (explaining contemporary tactical aspects of fleet management) and a comprehensive and well argued ‘Editor’s Afterword’ summary. Editor’s notes are spread throughout the NSA, integrated with the extensive original footnotes...

... The NSA is heavy on detail and footnoting, complemented by the Editors’ Notes. While many Jutland books refer to the NSA, to have a copy now available with supporting modern analysis is a most timely addition to the study of Jutland in its centenary year. Appendices include the distribution and organisation of British ships and the fleet, British and German casualties by individual ships, damage sustained by individual ships on both sides and summary of signals received. Annexes provide Jellicoe’s letters to the Admiralty and extracts from his GBFO and Jellicoe’s predecessor’s (Admiral Callaghan) pre-war tactical instructions.

In summary, Seaforth Publishing and editors Schleihauf and McLaughlin have done a valuable service to naval history by recreating the NSA for a new centennial audience. While competently written battle narratives can be found in numerous books, it is the feeling that one is holding this contentious document in one’s hands and reading Dewar’s analysis which caused so much angst so long ago that gives the Jutland enthusiast an insight into the battle’s emotive aftermath.

The reader can judge for him/herself the merits, or otherwise, of Dewar’s arguments safe in the knowledge that the Admiralty won’t be sending a severe letter ordering the return of this classified document.

As featured in The Times

WILLIAM SCHLEIHAUF, a Canadian naval historian, had a lifetime ambition to publish a modern edition of The Naval Staff Appreciation, but died before he could see its completion. It has been carried to fruition by a colleague, the American naval writer Stephen McLaughlin.