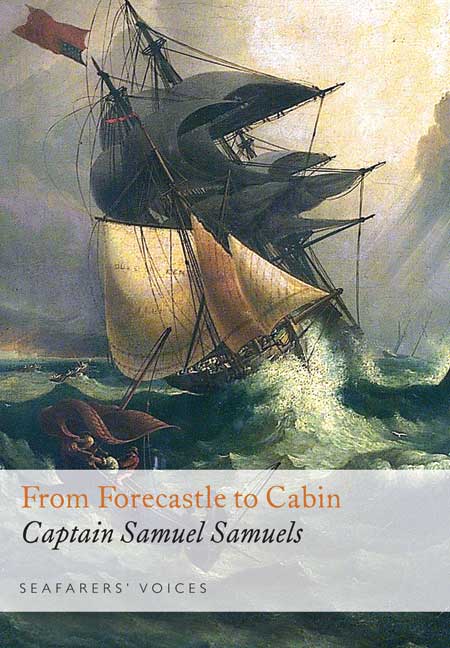 Click here for help on how to download our eBooks
Add to Basket
Add to Wishlist
You'll be £4.99 closer to your next £10.00 credit when you purchase Seafarers' Voices 8: From Forecastle to Cabin. What's this?
Need a currency converter? Check XE.com for live rates

This is the autobiography of an American who ran away to sea at the age of 11 and charts his rise from the lowliest seaman (berthed under the forecastle) to the command of his own ship and the occupation of the luxurious after cabin. In the course of an action-packed career spanning half a century, he experienced almost all of the vicissitudes of life in the nineteenth-century merchant service: storm and shipwreck, famine and disease, press-gangs and desertion, piracy, violence and mutiny – this last, at different times, as both mutineer and victim. Like many a sailor he was often in more danger ashore than afloat, but many of his adventures make excellent stories – not least his romantic, but foolhardy rescue of a Christian woman from the harem in Constantinople. In this case the story did not quite follow the script, as she married his accomplice in the rescue.

Samuels is best known for his later career, as captain of the packet ship Dreadnought, a ship built especially for him and under his direction. Known as ‘The Wild Boat of the Atlantic’ in the 1850s this ship was reckoned the fastest vessel on the New York–Liverpool service, and regularly beat even the steamers on this route. This success was largely down to Samuels’ hard-driving style as master, and much of the latter part of the book is taken up with the resulting crew troubles, culminating in a full-blown mutiny that he put down with characteristic forcefulness.

This handy-sized version of a much longer accounting of American Captain Samuel Samuels' growth and learning experiences on and off several vessels, the most famous being the Dreadnought, made a quick and easy read for this reviewer. Being interested in journals and logs of voyages, I found it enlightening to read how Capt. Samuels grew up and learned to handle just about any situation presented a seafaring young man in the nineteenth century.

Samuel Samuels learned to live on pennies a day, survive prison, and set his own broken leg bone are only some of the intolerable pains to which most anyone else would succumb. Aging fast, dealing with every imaginable situation and human tragedy, and having othe pportunity to see and do what most could not, seems to be the best and worse of a world Samuel endured. It was a lifestyle in need of every prayer known to man.

The story reads quickly as I stated, but it also includes much detail. Each tale is presented in a way to be savored and enjoyed. Having sailed various sized vessels myself, it intrigued me to read every written word and absorb each colorful entry. I found myself circling phrases and returning later to reread and savor the facts ofhow Samuel dealt with the situation. I know I will reread this version and I recommend it to anyone eager to have a quick education on what it means to be a seafarer willing and eager to gain a worldly education by starting at the bottom of the ship and working his way to the top.

From Forecastle to Cabin is the eighth volume in the Seaforth Publishing’s Seafarers’ Voices series, a reprint of collection of nautical accounts by a cast of writers ranging from a seventeenth-century Protestant galley slave to a memoir of life at sea by a Victorian-era whaling captain’s wife... McInerney’s lightly annotated introduction, comprising about ten percent of the slim, octavo-sized volume, is particularly useful. From Forecastle to Cabin is a nautical page-turner that may be completed in an evening. It is a splendid read.

As Vincent McInerney points out in his introduction, the importance of Samuels’ book is that it demonstrates how a man, who begins his career as a lowly seaman, could advance to captain a ship, and how his views of seafaring life change as he matures and advances. His recounting of the mutiny aboard Dreadnought is spine-tingling, yet matter of fact. At other times, his tale is harrowing – such as when he encounters a ghost or discovers a mate who commits suicide – or astounding as when he talks about the armament on one ship. To defend themselves against pirates who prey on ships in Chinese waters, his vessel carries “four carronades and six ‘Quakers’ (mock cannon bolted to the bulwarks which, with painted-on gun ports, give the appearance of a sloop-of-war.” (79) Rather than romanticizing his seafaring life, Samuels wishes to show the reality of it. how he ends his narrative is just as compelling as how he begins, and his words will haunt readers long after they close the cover.

This is one of those books that has to be read. It covers a complete slice of life in the early Nineteenth Century during the British dash for Empire when the ascendancy of Britain on the world map depended on captains like Samuels, where piracy and famine and war added to the trials of storm and tempest. Samuels has inspired several works of fiction but his own story is hard to beat for excitement. Buy a copy now.