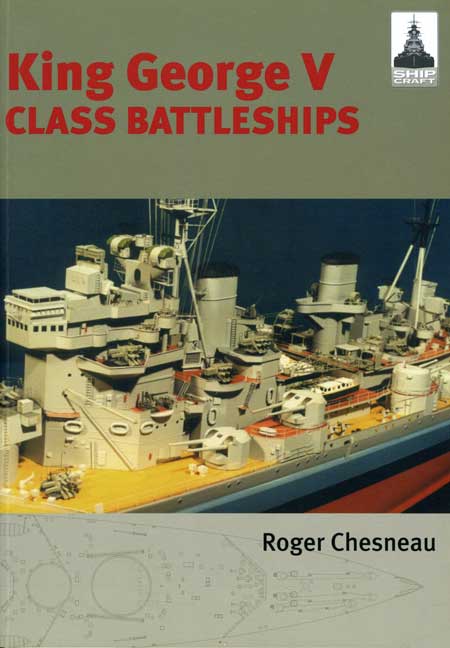 Add to Basket
Add to Wishlist
You'll be £10.49 closer to your next £10.00 credit when you purchase ShipCraft 2: King George V Class Battleships. What's this?
+£4.50 UK Delivery or free UK delivery if order is over £35
(click here for international delivery rates)

The ‘ShipCraft’ series provides in-depth information about building and modifying model kits of famous warship types. Lavishly illustrated, each book takes the modeller through a brief history of the subject class, highlighting differences between sister-ships and changes in their appearance over their careers. This includes paint schemes and camouflage, featuring colour profiles and highly-detailed line drawings and scale plans. The modelling section reviews the strengths and weaknesses of available kits, lists commercial accessory sets for super-detailing of the ships, and provides hints on modifying and improving the basic kit. This is followed by an extensive photographic gallery of selected high-quality models in a variety of scales, and the book concludes with a section on research references – books, monographs, large-scale plans and relevant websites.

The five battleships of the class covered by this volume were the most modern British capital ships to serve in the Second World War. They were involved in many famous actions including the sinking of both Bismarck and Scharnhorst, while Prince of Wales suffered the unfortunate distinction of being the first capital ship sunk at sea by air attack.

In short, this book is essential reading and reference material for anyone contemplating, or in the process of, building a model of one of this class of ship.

Roger Chesneau is a well known name in writing about Naval subjects, and this softcover book on the King George V class of battleship for modellers is well worth taking a look at. It opens with an overview of the design and careers of the 5 ships in this class. Perhaps the best known were King George V itself, along with Prince of Wales and the Duke of York. Maybe less well known were Howe and Anson. The main armament layout was originally intended to have 3 main turrets, each with 4x 14in guns. In B-turret, that was reduced to only 2x 14in as a weight saving measure to allow extra armour to be fitted elsewhere in the ship.

All launched during the course of WW2, King Geopge V was flagship during the hunt for the Bismark, and Prince of Wales was in company with the Hood when the Bismark sank her. It was shells from the Prince of Wales which damaged Bismark to the point that she would need to head for the French coast for repairs. The rest of that story is of course well known. Prince of Wales was later sent to the Far East, where she was caught by Japanese bombers along with the Repulse and sunk, the only vessel of the class to be lost during the war. The other four all survived, to be mothballed in about 1950 and all finally scrapped towards the end of the 1950s.

Then the book moves on to examining the various plastic kits and aftermarket accessories in the variety of scales that are available for the class. Roger covers the 1/700 and 1/350 models by Tamiya among others, along with the etched brass accessories available for the class of ship by White Ensign, Toms Modelworks, Eduard, Gold Medal Models and others, all very effectively surveyed. This is then followed by a Model Showcase showing the results achieved by a variety of skilled modellers, and on models in a variety of scales. Examples include 1/700 (Tamiya kit), 1/350 (Tamiya kits), 1/600 (Airfix kit) along with some stunning scratchbuilt examples in both 1/200 and 1/192 scales. There is also a section on the Appearance of the different ships, including plans and colour profiles, with more information on the changes in anti-aircraft fits, radar equipment etc which resulted from various refits, and these are also illustrated with plenty of archive photos as well.

This is a first class guide with a well-written script and an exceptional number of photographs and illustrations. Those who are looking for guidance in making other warships should certainly consider the other books in the ShipCraft range.