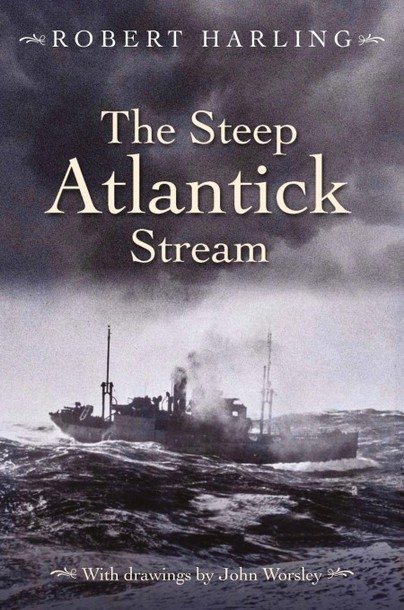 Preorder
Add to Wishlist
You'll be £10.39 closer to your next £10.00 credit when you purchase The Steep Atlantick Stream. What's this?
+£4.50 UK Delivery or free UK delivery if order is over £40
(click here for international delivery rates)

First published in 1946, this atmospheric memoir of the Battle of the Atlantic offers one of the most original accounts of war at sea aboard a corvette, escorting convoys in both the North and South Atlantic. The author, an RNVR lieutenant, experienced the terrors of U-boat attacks and the hardships of autumn gales as well as the relief of shore runs in ports as far apart as Halifax and Freetown.

The narrative begins with Harling’s voyage from the Clyde to New York on the Queen Mary (or QM, as she was known during her martial career), on route to join a newly-built corvette in Halifax, Nova Scotia. He was to be her First Lieutenant, and his service at sea started in the spring of 1941, just as the battle of the Atlantic was entering its most crucial stage. During the first east-bound convoy he was to experience attacks by U-boats, the loss of merchant vessels and a steep learning curve as the ship’s crew struggled to live in the harsh wartime conditions. Later that summer they made return voyages to Iceland where runs ashore offered some solace from dangerous days at sea. Time was also spent in the South Atlantic with voyages to Freetown and Lagos, before a short interlude when he experienced the excitement of fighting with Coastal Forces. The corvette subsequently returned to escorting convoys from Halifax to Europe.

His narrative is both serious and humorous, and his picture of wartime Britain, his descriptions of being buffeted by great storm-tossed seas in the ‘cockleshell corvettes’, and the recounting of grim losses are all too real and authentic. His story ends as he leaves his ship after a violent cold developed into pneumonia, and soon afterwards he hears the heart-breaking news of her loss, along with the captain and half the crew, after being torpedoed. He is left to ponder on the many tombless dead consigned by the war to the Steep Atlantick Stream.

ROBERT HARLING was a key figure in mid twentieth-century graphic design, editor before the war of Typography and later House & Gardens, which he edited between 1951 and 1993. At the start of the war, and being a keen sailor, he took part in the Dunkirk evacuation, before serving on Atlantic convoy duty. His close friend Ian Fleming was then responsible for his transfer to the newly established unit 17Z where he spent the rest of the war, involved with liaison between the naval intelligence division and British propaganda teams. He died in 2008.