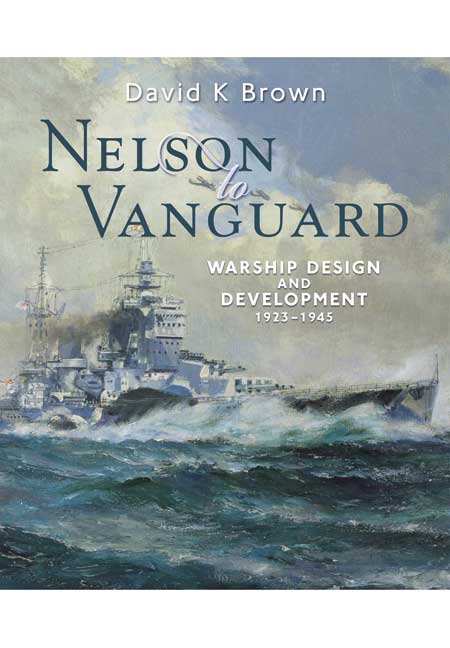 Click here for help on how to download our eBooks
Add to Basket
Add to Wishlist
You'll be £8.00 closer to your next £10.00 credit when you purchase Nelson to Vanguard. What's this?
Need a currency converter? Check XE.com for live rates

Nelson to Vanguard is the third volume in D K Brown's bestselling series on warship design and development looks at the Royal Navy's response to the restrictions placed on it by the Washington Naval Treaties in the inter-war years, and analyses the fleet that was constructed to fight the Second World War.

He focusses on the principal pre-war developments such as the first purpose-built aircraft carriers and the growing perception of the threat of air attack to warships. All the wartime construction programmes are covered, such as the massive expansion in escort ships to counter the U-boat menace, and the development of the amphibious warfare fleet for the D-Day landings in 1944. Full analysis is also provided of the experience of wartime damage, as well as the once top secret pre- and post-war damage trials.

Illustrated throughout with a superb collection of contemporary photographs and numerous line drawings, this now classic work is required reading for naval historians and enthusiasts.

“Looks in detail at the principal pre-war developments.”
“The whole book is illustrated with a superb collection of contemporary photographs and numerous line drawings.”

Those with an interest in wartime warships and particularly British warships will find this book fascinating. It traces the development of the British warships from the inter-war period to the end of war two, covering many of the great ships of the time. The book includes chapters on battleships, fleet carriers, cruisers, destroyers, submarines an escorts, as well as chapters disguising the modernisation, updates and scrapping of vessels plus details of specific war time damage, production and repair. Given the quality and quantity of information and the photos packed into this 224-page book, it would be well worth a look at if wartime ships interest you, and the price being tucked just under the twenty pound mark, its good value for money too, Available from many good book stores.

D K BROWN led a distinguished career as a naval architect, retiring in 1988 as Deputy Chief Naval Architect of the Royal Corps of Naval Constructors. He published widely on the subject of warship design and built a reputation as a clear and brilliant commentator on the development of the ships of the Royal Navy. He died in 2008.