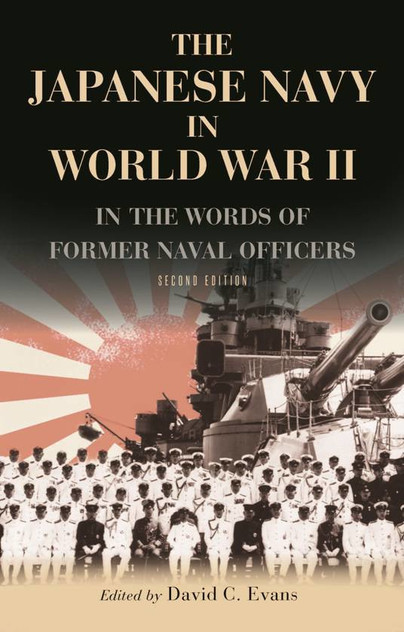 In the Words of Former Japanese Naval Officers

Add to Basket
You'll be £15.99 closer to your next £10.00 credit when you purchase The Japanese Navy in World War II. What's this?
+£4 UK Delivery or free UK delivery if order is over £30
(click here for international delivery rates)

Top-ranking Japanese officers offer their personal perspectives on the war in the Far East. The first edition of this book was lauded by historians and enthusiasts, eager for the Japanese viewpoint, and for the unique nature of these contributions; this new revised edition adds five substantial chapters to the original twelve and provides a full picture of the IJN's role in the war.

Most of these moving and fascinating accounts were written in the 1950s and retain the immediacy felt by the writers who had participated in extraordinary events. They provide valuable information on the strategy, tactics and operations of the Japanese fleet, as well as insights into the personalities and motives of the leaders. Here, Vice Admiral Shigeru Fukudome comes to grips with the allegations that the attack on Pearl Harbor represented strategic folly, political blundering and tactical stupidity. Captain Mitsuo Fuchida describes how his bombing group unleashed 'devils of doom' on Battleship Row, while Mitsuru Yoshida gives an eye-witness account of the sinking of the battleship Yamato. The new contributions to this edition, especially translated for this book, discuss operations in the Indian Ocean, the battle of the Philippine Sea, the protection of merchant shipping, submarine warfare and Japan's overall naval strategy.

A brief introduction precedes each essay to set it in its historical context, while a biographical summary of each contributor is included. A striking collection of photographs and maps augment the compelling text. This is a very significant contribution to our understanding of the Japanese navy in WWII.

A very worthwhile book for a wide audience and it holds a wealth of new materials.

This is an utterly fascinating series of eyewitness accounts of the Pacific War as seen from within the Japanese Navy, and provides a very different view of many of the most famous battles of the war.

This paperback book holds these accounts in over 500 pages and makes for fascinating reading, giving a valuable insight into the wartime service of the Imperial Japanese Navy (IJN) during WW2, the tactics and strategy they employed as well as a record of events. A valuable resource for anyone interested in the war in the Pacific.

...well worth reading for both the informed and the inquisitive.

The second edition of a definitive work first published in 1986 and lauded by historians. The collection of essays and thoughts of Japanese Naval officers provides many fresh insights from a Japanese perspective. – Very Highly Recommended.

This anthology of articles by former IJN officers is the 2017 paperback version of the 2nd edition of a work originally published in 1986 by Naval Institute Press but which has much earlier origins. Most of the articles had appeared individually in the Institute’s Proceedings over the period 1952-1979 and two further articles of a similar nature were translated and incorporated in the 1st edition, most of which was edited by Roger Pineau and Clark Kawakami and with assistance by various translators. Each of the articles has a short Introduction and Commentary. In editing the 2nd edition, David Evans has adhered faithfully to this format but there are five additional chapters on topics such as operations in the Indian Ocean and Philippine Sea, the protection of merchant shipping, anti-submarine warfare and Japan’s overall naval strategy. The intention was therefore to cover what was seen as gaps in the original edition. These have been inserted chronologically into the original chapters where appropriate. He has also added short biographies of the authors of the additional chapters to maintain the form of the original edition.

However what this 2nd edition is not, is a re-appraisal of the earlier ideas (except as the editor says in his Preface, for the correction of minor errors). Many of these ideas have now been shown by later research to be based on views formulated during wartime and produced as a counterpoint to various books and articles that appeared in the immediate aftermath of WWII, particularly Samuel Eliott Morrison’s mammoth 15 Vol. History of US Naval Operations in WWII (1947-62). Therefore the purpose of many of the articles is to justify the Japanese position and actions in the light of the many criticisms made by (mainly) American writers and researchers. In some cases it is to justify personal actions.

So how well do the selected articles do this and do the additional articles justify inclusion in the 2nd edition? A few examples will have to suffice.

In Chapter 1 Adm. Shigeru Fukudome provides justification of the Pearl Harbor attack to counter allegations that it was a tactically brilliant strategic blunder of the first order, by revealing the various events that led to its adoption. But he also adds to the controversy over Adm. Nagumo’s failure to follow up the first two strikes. This is a point that Capt. Fuchida also makes in Chapter 2 and he also adds fuel to the issue with a criticism of the lack of a detailed search for the USN’s missing carriers. Fuchida returns to this point in Chapter 5 on the Battle of Midway, in a much more detailed explanation.

In Chapter 12 – “Why Japan’s Anti-submarine Warfare Failed”, Atsushi Oi covers the failure to adopt the convoy system that Great Britain used to great effect in 1917 and 1939 in similar circumstances, as well as its failure to build escort vessels and organise ASW until it was too late. He shows that the problem was not just that it was alien to Japanese character, but also that there was too much competition between the Army and Navy (and within the Navy itself) for scarce resources and inadequate political control of the service chiefs, who had also become the political leaders.

The final chapter “Thoughts on Japan’s Naval Defeat” by Toshiyuki Yokoi is particularly enlightening about Japan’s wartime strategy and leadership. It is clear that the Japanese leaders did not have a clear idea of how to defeat a wide range of enemies, other than to draw the naval powers into a “decisive battle” that in the end did not turn out in Japan’s favour. With the failure of this outmoded doctrine of victory, they were unable to formulate strategies to respond to changing circumstances as the war progressed, except to resort to the Kamikazes. As he says at the end of his article, this defeat “remains an unenviable monument to obstinate, outdated naval strategists”.

Overall, the 2nd edition with its additional 5 Chapters, provides a more comprehensive coverage of different aspects of the IJN’s war against the USN and David Evans’ extra chapters are exactly what the original 1st edition needed. With the exception of Chapter 4 on operations in the Indian Ocean in 1942, there is no mention of British involvement (apart from a brief reference in Chapter 3 to the loss of two battleships off the coast of Malaya). This is an understandable omission but the lack of any contribution by Minoru Genda, the planner of the Pearl Harbor attack, is less easy to understand, as he wrote his recollections in 1967 prior to the 1st edition, so there are still gaps that could be filled.

But this is small criticism of an otherwise excellent 2nd edition and Seaforth Publishing are to be congratulated on making the Naval Institute Press paperback edition available to UK readers at an affordable price.

In short, this book has done more to educate, inform and engage me than any other book I have read about the PTO and if you're at all interested in the Pacific Theatre of WWII then I would consider it essential reading.

DAVID C EVANS (1940-1999), editor of this collection, served in the US Navy as an ensign and lieutenant, USNR. He taught history at the University of Virginia and was the associate dean of the School of Arts and Sciences. He co-authored Kaigun: Strategy, Tactics, and Technology in the Imperial Japanese Navy, 1887-1941, also published by Seaforth Publishing.