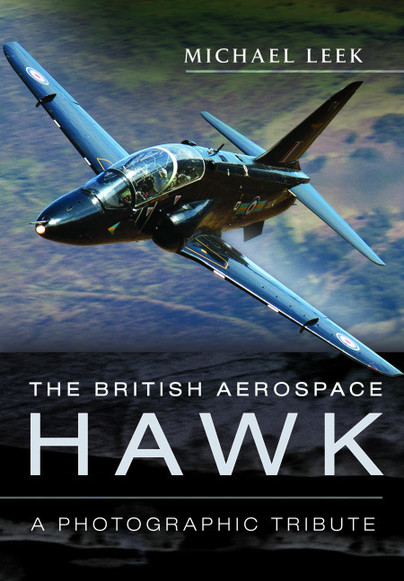 Preorder
Add to Wishlist
You'll be £15.19 closer to your next £10.00 credit when you purchase The British Aerospace Hawk: A Photographic Tribute. What's this?
+£4.50 UK Delivery or free UK delivery if order is over £35
(click here for international delivery rates)

Through a collection of dramatic and informative photographs, supplemented by cutaway illustrations, this book, the first in a mini series of three, highlights the agility and flexibility of this dedicated RAF and RN trainer. With the T1 and T1A versions soon to be retired from UK service (eventually to be replaced by the BAE Systems Hawk T2) this book looks set to represent a fitting tribute to the type, flown by all fast jet pilots since its introduction into service in late 1976.

In order to set the scene for the future training needs of fast jet pilots, photographs of T2 aircraft are included. The book includes photographs by the author and a select number of other amateur photographers, with the vast majority of photographs – never previously published – taken low level around the hills and mountains of England, Scotland and Wales. This impressive new photographic publication will be presented in full colour and is sure to be prized as a collector's piece amongst fans of the genre.

For those of us in childhood who were fascinated with aircraft this book fires the imagination to flights of fancy once again! It is a visual recording of a piece of aviation history of the British Aerospace Hawk, particularly the Mk I and Mk IA.

The tome celebrates the Hawk through 279 digital photographs (in five different formats) taken by a handful of dedicated amateur aviation photographers who brace unpredictable weather conditions to climb remote locations in mostly mainland Britain, just for the sake of their hobby.

With the emphasis on photographing the Hawk in a low level environment, this fraternity share information, going to extraordinary lengths to be in the right place at the right time. Their resolve is rewarded with some dramatic close-up images; everyone a gem, particularly where an aircraft is composed in relation to a land-locked background. They convey a sense of the thrill of anticipation – hearing that rumbling sound gradually crescendo! There’s only a split second window of opportunity to capture the plane before a thundering roar vibrates one’s very being as it passes, often below the photographer.

Although not a definitive history of the Hawk, as clarified by the author, this book traces the development of the design of the Hawk from the T1 into the T1A and eventually into the more advanced weapons platform T2, as a two-seater fast-jet trainer, ultimately designed for manoeuvrability and capacity of transonic flight, enabling pilots completing their training to be better prepared for front-line operational service. Included is a summary chapter on the history and metamorphosis of the Red Arrows into their current airframe.

Coming from arts and design background, the author provides detailed perspective cutaway illustrations that provide insights into the relationship between construction, avionics and other systems. There is a step-by-step commentary on the whole sequence of seat ejection that upon activation takes less than a second to complete. There is even a discussion on the aesthetics of the design of paint schemes applied to Hawk aircraft.

On the whole this book has everything any plane enthusiast wants to know about the Hawk T1 and T1A in its final years of RAF service.

Beautiful aircraft, stunning photography and timely and informed commentary make for a genuinely impressive package. This is an uncompromising book rushing up to us just like a Hawk screaming through the Welsh mountains. It has been put together with care and a strong attention to detail. The next two volumes promise to be equally as good and I hope these sort of photographic books that fulfil any number of roles will become a regular feature in the P&S catalogue. A standard has been set here that will be difficult to improve on. But we can relax and see how that one pans out. It’s a win-win situation, either way, as far as I can tell.

The book features over 250 lavish colour photos of the Hawk in use by both the RAF and Royal Navy. Many of the shots feature the aircraft, something of an unsung hero amongst the panoply of more glamorous jets, undertaking dramatic low flying training in the Scottish Highlands.

A must-have for devotees of military flying and aircraft.

Very much a book for those who love the Hawk...It seems like only yesterday that the RAF and Royal Navy brought the Hawk into service, this big, handsome book reminds one that it was as long as 1976.

'The British Aerospace Hawk: A Photographic Tribute' by Michael Leek includes more than 150 full colour photographs of the planes flying low level, sometimes just 100ft off the ground. As the photos were taken from remote mountainsides, they actually look down onto the Hawk MK1 jets as they speed past. The Hawk has been used for many years to train pilots, and the book has been a labour of love for Michael, who spend nearly a decade compiling the shots.