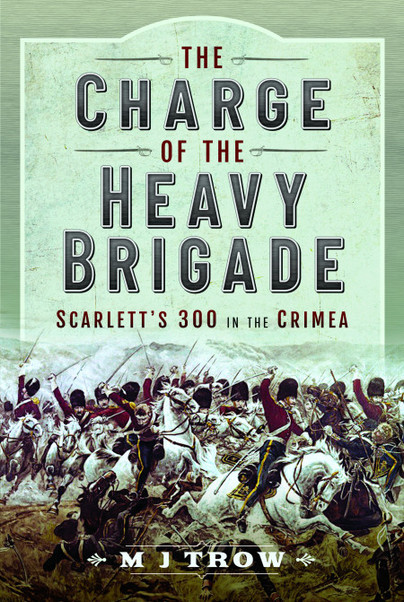 The Charge of the Heavy Brigade (Hardback)

Add to Basket
Add to Wishlist
You'll be £20.00 closer to your next £10.00 credit when you purchase The Charge of the Heavy Brigade. What's this?
+£4.50 UK Delivery or free UK delivery if order is over £35
(click here for international delivery rates)

So well done, M J Trow, for focusing on the Heavy Brigade which, an hour before the Light Brigade's suicidal charge, had succesfully taken on a Russian enemy three times its size. This will be a useful reference work.

This volume will appeal to a wide audience from medal collectors, modellers, academics and military historians. A huge amount of effort must have gone into researching and writing this exceptional tome. It has lots of details about the Charge and its participants which will make it interesting to read by both the general historian and the specialist in this field. It is highly enjoyable to read, and it comes highly commended.

This book will be enjoyed by anyone with an interest in the Crimean War. It brings a new perspective to the performance of the British
Cavalry Division at Balaklava and provides an authorative overview of the entire campaign. It also surfaces a wide range of first-hand accounts which provide'colour' and insight. Recommended.

Not only does the author provide great operational detail of the battle, which is usually covered with a focus on the Light Brigade, but he expands the aperture of information and understanding to brilliantly inform the reader of operations by focusing on the Heavy Brigade as a contrast. The Heavy Brigade was intended as the primary British shock force, leading frontal charges to break enemy lines. Unlike the Lord Cardigan and his Light Brigade, Major General Scarlett and the Heavy Brigade successfully attacked its assigned objective.

The author’s well-researched focus on defense policy, organizational matters of the time, the British purchase (of officer commissions) system, the Red Cross and like efforts, and his exceptional coverage of things logistics and sustainment, and what we now call the Common Table of Allowances (TOA), makes this well-researched book the cardinal effort that it is. M. J. Trow’s “The Charge of the Heavy Brigade: Scarlett’s 300 in the Crimea” (ISBN 9781399093002) is a must read. Five stars.

This is a really good narrative history of the events surrounding the service of the Heavy Cavalry Brigade in the Crimea. Of necessity it includes many aspects of the Light Brigade and Infantry actions and paints a vivid picture of the internal posturing and squabbling among the senior command that had a consequential impact on events. The author is very clear where he lays blame.