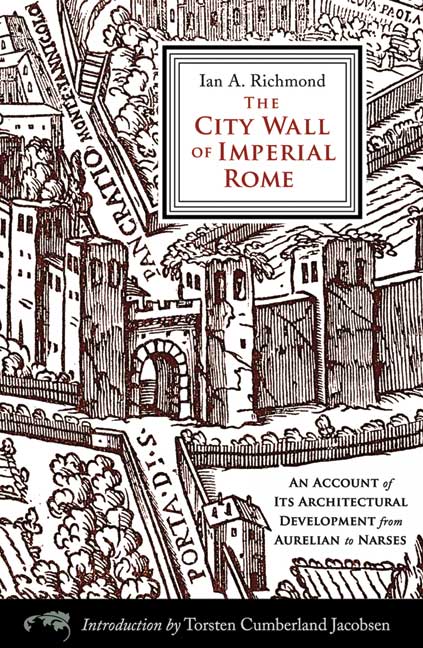 An Account of Its Architectural Development from Aurelian to Narses

Add to Basket
Add to Wishlist
You'll be £14.99 closer to your next £10.00 credit when you purchase The City Wall of Imperial Rome. What's this?
+£4.50 UK Delivery or free UK delivery if order is over £35
(click here for international delivery rates)

The City Wall of Imperial Rome: An Account of Its Architectural Development from Aurelian to Narses by Sir Ian A. Richmonds was first published in 1930 and reprinted in facsimile in 1971. Despite its scarcity, it remains the essential work on the imperial fortifications of Rome and has lost none of its importance since its original publication. Despite the Wall's great importance for our understanding of Roman fortifications, there have been no further major investigations. Rome had originally been fortified by the old Servian Wall, built during the Republican period in the late 4th century BC. The city expanded greatly over the centuries and by the time of emperor Augustus (27 BC–14 AD) little trace of the wall remained. However, there was not a need for a protective wall until the crisis of the 3rd century AD, when barbarian tribes in 270 broke into northern Italy. In response to this new threat, the Aurelian Walls were constructed between 271 and 275 to protect the capital against barbarian raids. The walls enclosed all of Rome on both sides of the Tiber River—an area of about 5.3 square miles—and ran for some 12.5 miles. The construction project was one of the greatest in the history of the city of Rome and the walls were built in a remarkably short time, with the emperor Aurelian himself overseeing the project. Initially, the main aim of the wall was not to withstand prolonged siege warfare but to deter barbarian invaders who were insufficiently equipped for siege warfare. Later, emperor Honorius improved both the walls and gates, so that it could withstand a real siege, and to make it possible to be defended by a smaller garrison.

During the time of the Gothic War (535—552), five thousand Roman troops withstood a year-long siege by an estimated 150,000 Goths due to the strength of the walls. When Rome was captured in 545 by the Ostrogothic king Totila, part of the walls were deliberately destroyed to prevent the Romans from ever using them again. The Aurelian Walls remain remarkably well-preserved today, due largely to their constant use as Rome's primary fortification until the nineteenth century. The walls are however, somewhat neglected by the Italian authorities, and a major collapse was caused in 2007 due to lack of restoration. The walls of Imperial Rome however remain the greatest monument of ancient Rome to be seen in the city. In this new edition, Late Antiquity specialist Torsten Cumberland Jacobsen provides current information about the state of the walls and their preservation, an updated bibliography, and an essay about Sir Richmonds and his career.