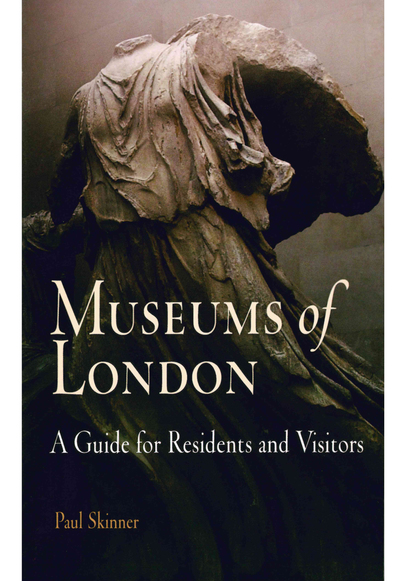 A Guide for Residents and Visitors

Add to Basket
Add to Wishlist
You'll be £10.99 closer to your next £10.00 credit when you purchase Museums of London. What's this?
+£4.50 UK Delivery or free UK delivery if order is over £35
(click here for international delivery rates)

One of the world's most important cultural and commercial capitals, London was founded nearly two thousand years ago by the Romans. Over the centuries, the city has survived catastrophic fires, sieges, and plague, overseen a global empire, all while remaining a center for innovations in law, art, finance, and medicine. London's own histories lie, often quite literally, one upon the other, Saxon on Roman, Georgian on Tudor, modern on Victorian. Its sights and sounds, so marvelously recorded and memorialized by Shakespeare, Samuel Johnson, William Hogarth, Samuel Pepys, Charles Dickens, and others, are familiar even to those who have not yet walked its streets. The city's museums and galleries also tell its countless stones: tales of palaces and prisons, gardens and churches, exiles and inventions, and above all its people-merchants, princes, scientists, beggars, clerks, and painters.
Museums of London: A Guide for Residents and Visitors provides details of nearly one hundred and fifty museums, almost all within easy traveling distance from the center of London. Ranging from the awesome scale of the British Museum and the Victoria and Albert Museum to the astonishing riches of the National Gallery, the Natural History Museum, the Science Museum, and the Tate, the museums of London also include collections both smaller and stranger: with celebrations and explorations of garden history, musical instruments, freemasonry, fans, psychoanalysis, theater, clocks, and much else. Whether this is your first visit or London is your home, here is the ideal companion to the city's rich and varied museums.