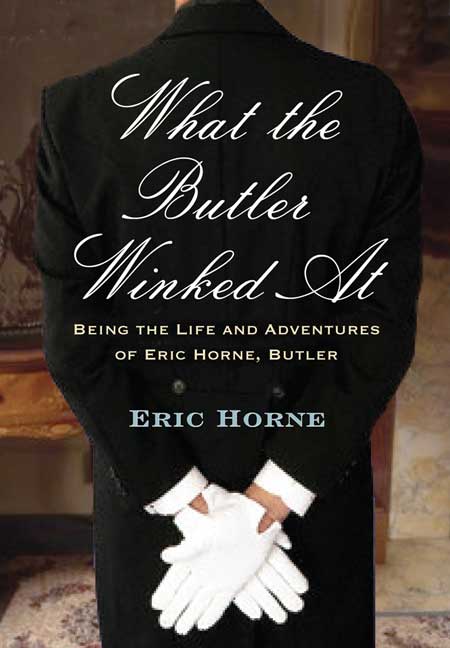 What the Butler Winked At (Paperback)

Being the Life and Adventures of Eric Horne (Butler)

Add to Basket
Add to Wishlist
You'll be £12.99 closer to your next £10.00 credit when you purchase What the Butler Winked At. What's this?
+£4.50 UK Delivery or free UK delivery if order is over £35
(click here for international delivery rates)

Eric Horne served as a butler in some of the great English country manors from the 1860s until just after World War I, when many of the families whose heirs died in battle were forced to sell off their homes. Born in Southampton, Horne came from a humble family who valued education. Horne excelled in school and wished to go to sea, but lacking his parents’ permission, he instead ended up as a footboy for a local household. Over the years, Horne moved up in the service of the aristocracy: his goal was to become butler to the king of England, a position he very nearly secured. He did end up in the service of several distinguished households for many decades, and upon his retirement in 1922, he decided to write his memoir. Horne is a unique voice; not only did he have intimate contact with his employers and the household staff, he also possessed literary talent, so that his account provides authentic detail as well as shrewd—and often witty—views of the aristocracy, the servants, and their activities. Horne is not sentimental though; he does not think that he used his life wisely, having never learned a true trade. He reveals the plight of the servant class, where once a butler lost his employment—particularly following the devastation of World War I—he was likely to end up in a poorhouse, because employers did not usually provide pensions and servants were rarely able to save enough money to survive on their own. What the Butler Winked At is a fascinating and essential account of life in a country house during the height of the Victorian and Edwardian eras, and is presented
here for the first time in trade paperback.

This 273-page paperback is a narrative of the life and times of the author and butler, Eric Horne. Coming hot on the heels of the TV period drama Downton Abbey, this is an easy to read and amusing behind the scenes account of life in grand English Country Houses told with feeling from personal experience and accompanied by anecdotes. You can sample what life was like through the eccentricities and peculiarities of the Victorian and Edwardian employers and staff the Butler meets in his job.

Horne achieved an almost impossible level of preserving and transmitting by literary means every worth noticing detail of his contemporary world, his reality. Perhaps, that is why the reader will re-live his experiences with a particular sharpness of realism.