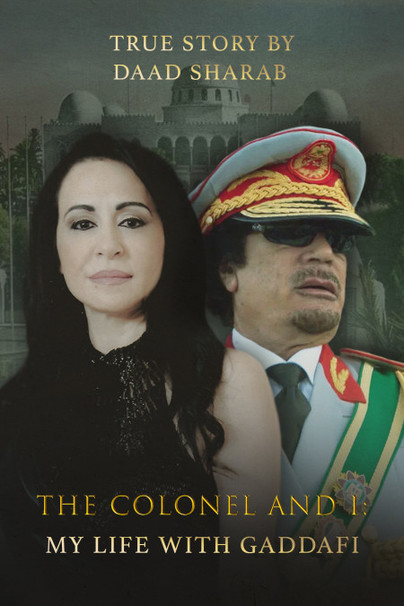 The Colonel and I: My Life with Gaddafi (Hardback)

As featured in The National. Read the article online, here.

As seen in the Daily Express. Read the article online, here.

You'll be £15.99 closer to your next £10.00 credit when you purchase The Colonel and I: My Life with Gaddafi. What's this?
+£4.50 UK Delivery or free UK delivery if order is over £35
(click here for international delivery rates)

The Colonel and I: My Life with Gaddafi is the inside story of the extraordinary world of Libya’s fallen dictator, Muammar Gaddafi.

For almost half his 42-year reign Daad Sharab was his trusted trouble shooter and confidante – the only outsider to be admitted to his inner circle. Down the years many have written about Gaddafi, but none has been so close.

Now, a decade after the violent death of ‘The Colonel’, she gives a unique insight into the character of a man of many contradictions: tyrant, hero, terrorist, freedom fighter, womaniser, father figure. Her account is packed with fascinating anecdotes and revelations which show Gaddafi in a surprising new light.

Daad witnessed the ruthlessness of a flawed leader who is blamed for ordering the Lockerbie bombing, and she became the go-between for the only man convicted of the atrocity. She does not seek to sugar-coat Gaddafi’s legacy, preferring readers to judge for themselves, but also observed a hidden, more humane side. The leader was a troubled father and compassionate statesman who kept sight of his humble Bedouin roots, and was capable of great acts of generosity.

The author also pulls no punches about how Western politicians, such as Tony Blair, George Bush and Hillary Clinton, shamelessly wooed his oil-rich regime.

Despite her warnings the dictator was ultimately consumed by megalomania and Daad was caught up in his dramatic fall. Falsely accused by Gaddafi’s notorious secret service of being both The Colonel’s mistress and a spy, her story ends in betrayal and imprisonment. Caught up in the Arab Spring uprising, she faced a fight for life as bombs rained down on Libya.


An interesting view of life of Col. Gaddafi and how the workings of a leader in Libya differs from the West.
I enjoyed this glimpse into another life, it provides a real eye opener and not everything you are told in the West is the full truth! There certainly seems to be two sides of Col. Gaddafi.
A good read and well worth your investment.

As a young 30-something, much of the history covered in this book surrounding Libya happened before my time.

That being said, the biography is exceptionally well written, giving a highly detailed account of how a young Arab woman broke the mold and ended up a confidant to one of the worlds most feared leaders at the time.

Often branded as a dictator, womaniser and tyrant, Daad Sharab gives a behind the scenes look at how Libya struggled to find its place on the world stage under the leadership of Colonel Gaddafi.

It was a true eye-opener not only to how business dealings were undertaken several decades ago.

Having read the book, I don't pretend to be a backer of all things Gaddafi; however, it makes me question how the media and politicians in all countries often change their foreign policies and positions at the drop of a hat.

Daad Sharab was never going to be a dutiful stay-at-home Arab wife. Encouraged to study by her father, the brilliant young Jordanian woman became a highly-educated businesswoman who decided to work for the intriguing Colonel Gaddafi in Libya. Her father advised her not to go but she was offered a prestigious position negotiating lucrative contracts for Gaddafi with high pay, and she liked the sound of the opportunity. Here, she tells her fascinating story, and she paints a very different picture of the Colonel, and describes some of the important figures she met.

Daad became a close personal adviser to Gaddafi, so she knew him very well, but allegations of an affair are completely untrue. She writes that, although eccentric, he was concerned about his country, and tried to do his best for ordinary Libyans. He also promoted women's rights and literacy, and Libya's healthcare system was excellent by the standards of other countries in the region. She thinks that he went 'off the rails' with his Pan-African and 'King of Kings' ambitions.

The rumours of his philandering with and even sexually assaulting the women of his famous 'Revolutionary Nuns' are untrue, she thinks. However, he did rely on a designing woman to procure young women for him, according to Sharab. She made friends with some of his guard, who were well-educated, and treated well.

Sharab met world leaders, including the first President Bush, Prime Minister Blair, and powerful people, such as Hilary Clinton. Although Gaddafi imprisoned her, she doesn't hold a grudge against him, and she provides an extremely interesting account of his relationship with these leaders, especially Blair, and his downfall. She also writes about her court battle with a powerful Saudi Prince, and how she endured great family tragedies, and the hardships of her career.

This book is somewhat harrowing at times, but well-worth reading to see a different view of the Gaddafi regime.

This was a five star read! Fascinating and recommend you read this one!

A fantastic story filled with intrigue and insider information. What a fascinating life the well-educated author led as Gaddafi’s close confidante and troubleshooter for over 20 years in Libya. She met so many influential people including world leaders. She had an uphill battle with others around Gaddafi being a woman and from Jordan.

I have just finished reading this inspiring true story ....
The book helped me understand that strong women don't play victims ,they stand up and they deal ..
Well written amazing
Highly recommended book
Enjoyed every part of it ...

It ‘s one of the book you plan to read in certain time but once you start you can not stop. Amazing true story, amazing leader and amazing women who stayed like a iron with him for many years, The World needs more Daad Sharabs for sure , congratulations. 10 out of 10
I highly recommend for everyone to read.

I enjoyed every page... I loved it.. Such a great book

Great book. Highly recommend.
You must read this amazing book.

A master-class book written for a 21st-century audience.

In one word only, I can summarize The Colonel and I: My Life with Gaddafi by Daad Sharab as brilliant.

I don't think there's anyone who wouldn't benefit from reading this book. 5 stars

The Middle East Iron Lady
So pleased the book is finally out,I have been waiting years for it
Worth reading and highly recommended

This book is an amazing piece and really shows different point of view, yet allowing the reader to really have their own opinion. Recommend 10/10

Knowing all the ins and outs that happened from someone that legit was an insider at Gaddafi’s end and stating all the facts with no sugar coating or manipulation is something history needs and this book does exactly that! Reading the story of a fighter specially being a woman that made her way through life succeeding on the political side and never forgetting her role as a mother is such an inspiring and influential thing that shows society what women are capable off!
Trust me this is a must read!

I quite enjoyed the writing style and the way the events are portrayed. A well written, unique perspective worth reading. Highly recommended.

A very interesting story that motivates all women specially single women to keep working hard and succeed I really recommend this book for all people who want to feel inspired.

A well-documented and written piece of important history from a credible source. Certain that the author will continue sharing more stories of their own dynamic life experiences while also giving insights into a world that few are privy to experiencing. Stellar piece of work.

Great book and highly recommended! You hear the backstory of a great dictator and it puts rumours to rest.

An honest & sincere account. Most intriguing & fascinating book that capturers the readers imagination & transports you to a different era altogether. A must read & educative account of world politics & its functioning. Accolades to Madam Daad for this extremely forthcoming compilation that requires Courage, Grit & Honesty !!!

An amazing and truly inspiring story which portrays a life of a single mother that did her best to be successful, her story proves that it is not impossible for women to thrive and have a career in a place that is highly dominated by men. Highly recommended.

You are my idol! Great book, I enjoyed reading it and I recommend everyone read it.

Daad Sharab is a successful businesswoman and single mother who specialises in mediating for Western companies in the Middle East. For more than 20 years she represented Libya in delicate political negotiations, such as the release of the Lockerbie bomber, and arranged multi-million dollar commercial deals on behalf of Colonel Gaddafi. Throughout her career she has fought to raise the glass ceiling for young Arab women. Born in Saudi Arabia to Jordanian parents, Daad now divides her time between Amman, in Jordan, and London.