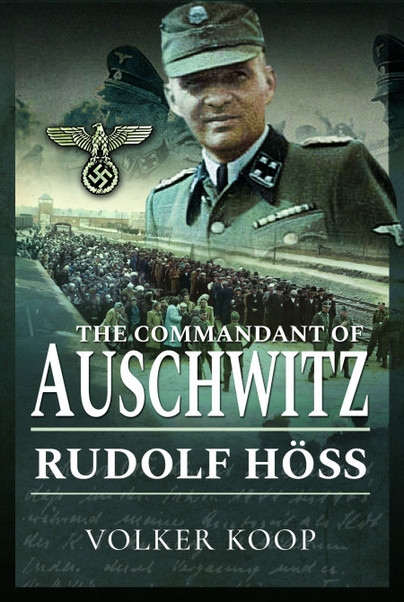 The Commandant of Auschwitz (Hardback)

Add to Basket
Add to Wishlist
You'll be £25.00 closer to your next £10.00 credit when you purchase The Commandant of Auschwitz. What's this?
+£4.50 UK Delivery or free UK delivery if order is over £35
(click here for international delivery rates)


I must admit that I am a big fan of the author Volker Koop, I have read a number of his books previously especially Martin Bormann. He writes so well, clear and comprehensively, he really seems to get to know the person or event with in-depth knowledge. So you can imagine I was more than happy to review this book which follows in the same traditions, despite this particular subject matter and what he did, or allowed to happen as the Commandant of the hell hole that is Auschwitz. Koop uses research and reports from contemporaries both for and against to form a very dark picture of a man who instructed mass murder on a huge scale. While this isn’t a pleasant read, it’s a well written and researched book that doesn’t shy away from the truth. A huge book that certainly warrants high praise and I would highly recommend it to those interested in this particular subject.

Painful as they are to read, I think it's important that our military historians write about them so that we can honestly say "we will never forget".

‘There are no better biographies of Goering, Goebbels and Himmler in existence.’ New York Review of Books Heinrich Himmler was the commander of the SS, and as founder and officer-in-charge of the Nazi concentration camps and the Einsatzgruppen death squads, he was responsible for implementing the extermination of millions of people. By the time he died he was the second-most powerful man in Germany and regarded himself as Hitler's natural successor, going so far as to attempt to negotiate independent peace with the Allies. Based on US documents handed over to the German Federal Archives and…