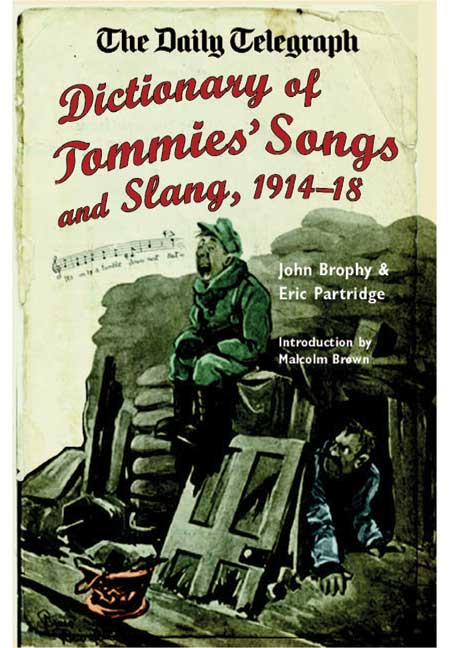 Add to Basket
Add to Wishlist
You'll be £19.99 closer to your next £10.00 credit when you purchase The Daily Telegraph - Dictionary of Tommies' Songs and Slang, 1914–1918. What's this?
+£4.50 UK Delivery or free UK delivery if order is over £35
(click here for international delivery rates)

During the First World War, British soldiers were renowned for their chirpy songs and plucky sayings. Indeed, nothing would lift the spirits of the often exhausted and weary troops more than a hearty singalong. These cheery, and at times ribald and satiric, songs and sayings have been collected together to give a fascinating insight into the life of the average ‘Tommy’ in the Great War.

The songs that feature in this collection include marching tunes, songs for billets and rude chants for when no commanding officer was present. Each song is accompanied by a short passage that traces the origins of the melody and accounts for lyrical alternatives. There is also a large glossary of soldiers’ slang words and phrases, revealing the Tommies’ vocabulary in all its bawdiness.

The Daily Telegraph - Dictionary of Tommies’ Song and Slang provides an insight into the courage, gaiety and astringent cynicism with which men armed themselves against the horrors of trench warfare.

I'm glad Brophy and Partridge put this book together, and I'm glad they revised and updated it over the years to create this truly useful compendium of a soldier's life in the Great War.

Altogether an extremely entertaining and enlightening book – I urge you to read it.

Fascinating Facts Of The Great War

The book, I learn, was first published in 1930. It comes in three sections — an updated introduction, the introduction to the original, and the song themselves (subdivided into categories such as Chants and Songs Rarely, if ever, Sung on the March and including a glossary of soldiers’ slang).

It’s a browsable book, or it ought to be. The fact that much of it comprises a reproduction of the original makes it hard to navigate around but that isn’t really a problem. It just means you have to scroll through rather than jump about via links or the Go To function. It didn’t matter. It was a book I got lost in, and in the best possible way.

Both the original and the modern introduction are enlightening, but the real value comes from the words the soldiers themselves use — a combination of knowingness and naivety and a view of life from both male and female perspectives and most definitely one from the trenches rather than the ocean wave. (“Never trust a sailor/an inch above your knee” runs one song.)

I was left both informed and moved by this book, and it’s one I shall definitely keep going back to.

All in all an excellent book, heartily recommended if like me you have an interest in researching relatives service who fought for King & Country.

This compendium of songs, slang-words and music hall references articulates the humour, stoicism, bravery and sheer bloody-mindedness of those who served in the Great War in a way that allows later generations to understand and appreciate the magnitude of what they endured and achieved. The veterans have now passed on but, happily, the songs that they sang and the language that they used have been recorded for posterity. Hence this thoroughly entertaining book goes beyond being a source of pleasure to stand as a very comprehensive archive of First World War popular culture.

This splendid book is presented in the form of a dictionary, so it's easy finding a song you think you might know and being able, with the resulting to entry, to place its origins and conflict. Superb.

This book represents, as mentioned, the victory of the human spirit, of the often macabre or cynical humor, on the gears of something enormous and bestial. For this reason alone, the book by Brophy and Partridge deserves to be read and appreciated.

I loved the fact this was a book on the war for the common man, most Great War books focus on the poetry, the wonderful illustrations from the artists and that is absolutely beautiful but it’s important that it’s remembered from every walk of life, every experience and this book helps do that.

I am completely fascinated by how language changes over time. I also love studying history. This wonderfulbook provides a combination of the two. It is in ever sense a dictionary, alphabetized with slang and definitions of each word as well as a collection of songs from the British during World War I.

This period of war-time history was particularly brutal. In studying the war you will find the first use of chemical weapons, flame throwers, and many more horrible affects of war. As with any major period of history the culture is greatly impacted. One of the ways during this war was the rise of a slang particular to those in the war, known as Tommies. Some of this slang inevitably carried over to our own country.

This is a republication of a text from 1930 and revisits an era long forgotten. The political agenda of the war is long forgotten by many and when discussed the individuals are lost. This beautiful compilation is an effort to bring back the individual soldier, specifically of the lower class, who was at the mercy of the reigning powers. While others may debate the war's causes and consequences, these authors do a wonderful job of preserving the culture of the every-day soldier who lived, fought, and died at the whims of world leaders.

You will thoroughly enjoy reading through this title and getting a glimpse of the language of the day. You may recognize some slang, while much will undoubtedly be new to you. For instance, kahaki, is a term we use readily to describe the light brown colored pants and originates with the British Army. It was first used in the 1880s and is from a Hindi word which described a drab colored linin cloth. Beginning in the early 1900s the word began to be used for the material we know as kahki today.

Discover this and more as you enjoy this fabulous time machine of language!

As a writer this book is an invaluable resource to accurately portray that time as well as help understand other books I may read.

This is a book researched and first published nearly 50 years ago, by those who actually fought in the first world war, which ended, now, over 100 years ago.

The introductions have been revised, but nothing else in side has been. And how could it not be that way.

Others, such as Cockney rhyming slang, used, as is explained in the book, because it allowed you to discuss things that were not supposed to be discussed in polite society, or in front of officers. So saying "bottle and glass" was another way to say "ass".

It is more a reference, and a wealth of songs, sayings, and thoughts and feelings it contains. It may not have a lot of pictures, but it has a lot of information.

"Singing, with intervals of silence or of whistling or humming provided a distraction from the long, slow count of the heavy laden miles..." "The Daily Telegraph Dictionary of Tommies' Songs and Slang, 1914-1918" is comprised of songs that "were universally sung in British Expeditionary Forces at one time or another during 1914-1918." Editors Brophy and Partridge have presented an impressive collection of these songs. Included are songs of longing such as "Keep The Home Fires Burning", sarcastic ditties "On,Oh,Oh It's a Lovely War! and an end of conflict song "The Bells are Ringing For Me and My Girl". In this reader's opinion, World War I literature has been greatly enhanced by the feelings emoted by the common soldier, be they words of determination, jest, sarcasm, weariness or exasperation. An excellent literary read.

With its mock faded looking cover this is a lovely 240 page book with illustrations that brought many a smile to me while reading it.

Brophy and Partridge’s book is a true classic written by two veterans of the 1914-18 war. It stands as one of the most perceptive books ever written on the British army of the First World War, an essential starting point for understanding the men that served, and a book that yields more every time one reads it.

This is fun and always worth dipping into for information and a smile.

Aimlessly wandering through the slang that became associated with the Great War is an absolute delight. The origins of so many words that have become main stream in the English language are presented by two men who lived through it and had good cause to comment. Originally published in 1930 when most of the words and phrases had not been mangled by later generations, this is a reprint of the 2008 update and the forward by Malcolm Brown starts with “This book is a jewel”; and it truly is!