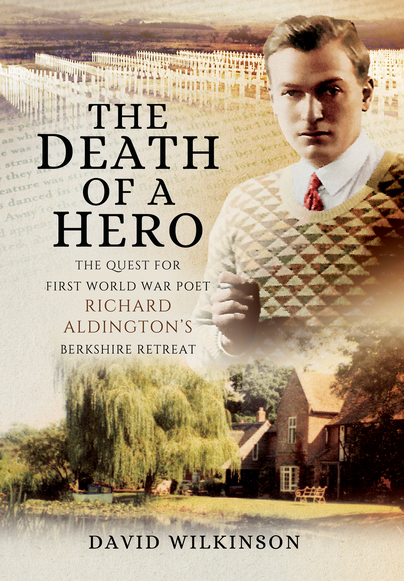 The Death of a Hero (Hardback)

Add to Basket
Add to Wishlist
You'll be £15.00 closer to your next £10.00 credit when you purchase The Death of a Hero. What's this?
+£4.50 UK Delivery or free UK delivery if order is over £35
(click here for international delivery rates)

When David Wilkinson bought a picturesque cottage alongside the Kennet and Avon Canal in Berkshire, he was astonished to learn that the writer Richard Aldington, a WWI veteran, had lived there in the 1920s. In his most famous novel, Death of a Hero (1929), Aldington mourned the loss of a generation of young men in the First World War, while in The Colonel’s Daughter (1931), he set out to show the effect of that loss on the young women left behind. Intrigued, Wilkinson decided to trace the people who had inspired this later novel. From servant girls to army officers, he interviewed those who knew and talked freely about Aldington’s time amongst them, and the worrying effect that the work had on their lives.

Aldington had moved on by the time he wrote The Colonel’s Daughter, but for those involved the story would prove to be far closer to the truth than was easily palatable. One woman in particular was immediately recognisable and had to live with the consequences of Aldington’s story for the remainder of her long life.
Wilkinson’s research led him to shoulder the uneasy truth of his findings, and the mantle of assumed guilt followed him as he discovered, first-hand, the uncomfortable effect of the novel on the village, and on the women of the ‘Lost Generation’.

I have read your manuscript with fascination, delight and awe. I knew of its existence and was familiar with some of the material [but] most of it is a revelation. And I so admire the imagination, ingenuity and determination with which you went about your quest, as well as the warmth and sympathy with which it is written. How fortunate for Aldington scholarship that it was YOU who moved into Malthouse Cottage - and that you did so WHEN you did. . . . The most fascinating aspect of it for me is the revelation that Aldington is a novelist in the Thomas Hardy mould - particularly in 'The Colonel's Daughter', 'Women Must Work' and some of the stories. I can't think of any other novelist whose work is so closely modeled on people, places and events around him. How interesting to discover that even a character like 'Coz' is taken from life.' . . . One of my favourite chapters is 'The Village'. I really liked the way you used Jessie Capper's journal to structure that chapter. I got such a strong sense of the village as it was - and of your own love of it. And the way you follow Aldington and T S Eliot's walk in the third chapter had already given me a strong 'visual' sense of the place. . . . There is so much warmth and humour in your story - and some lovely anecdotes.

For twenty years (1992-2012) Wilkinson was Associate Editor of The Richard Aldington Newsletter. His published works include an essay on Aldington’s post-war years in Richard Aldington: Papers from the Reading Conference (Department of English, University of Reading, 1986); Introduction to Roads to Glory by Richard Aldington (London: Imperial War Museum, 1992) and “Dying at the word of command”: The Last Days of Richard Aldington’s War’ (Université Paul-Valéry Montpellier, 1992). He now lives in Cornwall and has published extensively on the St Ives Art Colony. He is a member of the Little Parc Owles Trust, which was set up to further interest in Modern and Contemporary Art in St Ives.