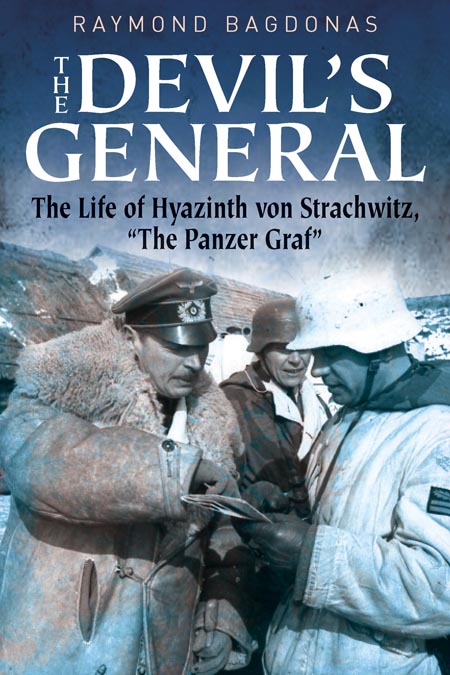 The Life of Hyazinth Graf von Strachwitz, “The Panzer Graf”

Add to Basket
Add to Wishlist
You'll be £14.99 closer to your next £10.00 credit when you purchase The Devil’s General. What's this?
+£4.50 UK Delivery or free UK delivery if order is over £35
(click here for international delivery rates)

This is the story of the most highly decorated German regimental commander of World War II, known as the 'Panzer Graf' (Armoured Count). An aristocratic Silesian, whose ancestors had faced the Mongols at Leignitz, Strachwitz first won the Iron Cross in the Great War. After fighting with the Freikorps and in between the wars, he was serving with the 1st Panzer Division when the Polish campaign inaugurated World War II.

Leading from the front, his exploits as commander of a panzer battalion earned him further decorations during the French campaign. Transferred to the newly formed 16th Panzer Division, he participated in the invasion of Yugoslavia and then Operation Barbarossawhere he earned the Knight’s Cross. The following year, during the advance on Stalingrad, he won the Oak Leaves for destroying 270 Soviet tanks at Kalach. Now commander of a regiment, he reached the Volga and fought ferociously on the northern rim of Sixth Army’s perimeter. Severely wounded during the battles, he was flown out of the Stalingrad pocket.

Upon recuperation, he was named commander of the Grossdeutschland Division’s panzer regiment, and won the Swords to the Knight’s Cross during Manstein’s counteroffensive at Kharkov. After fighting through Kursk and the ensuing defensive battles, he was transferred the next year to Army Group North where he won the Diamonds to the Knight’s Cross at Narva.

For the rest of the war, sandwiched around a stay in hospital, he commanded ad hoc battlegroups, and pioneered the formation of 'tank hunter brigades', consisting of deep-penetration infantry armed with panzerfausts and other demolitions who would ambush Soviet tanks. Wounded 12 times during the war, and barely surviving a lethal car crash, he was finally able to surrender to the Americans in May 1945.

Australian author/researcher Raymond Bagdonas, though impaired by the disappearance of 16th Panzer Division’s official records at Stalingrad, and the fact that many of the Panzer Graf’s later battlegroups never kept them, has nevertheless written an intensely detailed account of this combat leader’s life, as well as ferocious armoured warfare in World War II.