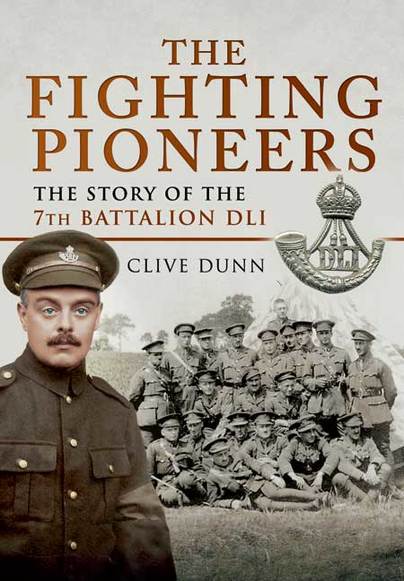 The Fighting Pioneers: The Story of the 7th Battalion DLI (Hardback)

Add to Basket
Add to Wishlist
You'll be £25.00 closer to your next £10.00 credit when you purchase The Fighting Pioneers: The Story of the 7th Battalion DLI. What's this?
+£4.50 UK Delivery or free UK delivery if order is over £35
(click here for international delivery rates)

This latest addition to the ever-growing list of battalion histories focuses on the 7th Durham Light Infantry. A territorial battalion, and primarily a pioneer battalion, they incurred losses not only through exposure to enemy fire when carrying out work, but also through taking part in the fighting.

The book naturally follows a chronological path, from the initial training to the battalion landing in France in April 1915. The battalion was thrown into action on 26th April, and personal accounts show the brutality of the action, with experiences of men being gassed and engaged in hand to hand fighting. By June the battalion received its first reinforcements of 160 men; the originals already seen as old hands.

During the Somme campaign the battalion moved to the area in August 1916. The men spent time working on tram lines and making roads. The account shows that this was no mean feat – clearing mud, collecting bricks to fill in shell holes and level the roads was a constant job. At Flers in September 1916 the battalion was digging trenches, gun emplacements, and communication lines, but the worsening weather during the latter part of the campaign did not help. The end of the campaign saw the battalion take part in the attack on the Butte de Warlencourt on 5th November 1916.

The mix of narrative and personal account works well to paint a vivid portrait of the experiences of the men. Many previously unpublished pictures are included (some from the front lines) as well as the usual collection of pictures of the men, postcards home, memorials and graves. One poignant pictures of over 40 men has been annotated showing who was killed or captured – about half their number.

Appendices include awards, battle honours, officers who served with the battalion, and other ranks who landed with the battalion in April 1915. The list of awards (including many citations) is testament to the fact that the battalion was never far from the action. A brief chapter is also devoted to the 2/7th battalion, which served at home for almost the whole duration of the war but was sent to Russia in October 1918.

Inspired by his grandfather who served with the battalion, Clive Dunn has assembled an admirable history of an unsung unit of the Territorial Force, the 7th Battalion of the Durham Light Infantry. It went to France in April 1915 as part of 151st Infantry Brigade of the 50th (Northumbrian) Division but in November of that year was converted into the Division’s Pioneer Battalion. It subsequently served with 8th Division after the 50th was reorganised in mid-1918. The title “fighting pioneers” refers to the fact that despite its role as a unit that provided manual labour for front line work, it certainly played its part in fighting. The loss of 600 dead and many more wounded through the years of the war are testimony to it. All pioneer battalions remained organised, armed and trained as other battalions were and in a sense the title applies to all of these relatively ignored units.

Over the last couple of decades we have become used to seeing the publication of unit histories. A great many are the work of individuals like this author, who had a family or other personal connection to their unit. Their dedication and effort, attention to detail and pursuit of small details stands out – and “The Fighting Pioneers” can now be added into a list of such work. Dunn has chased down facts from many sources and assembled a readable book that will also be valuable as a reference to the war and work of the battalion. It includes a good, if relatively small, collection of photographs (none of which I had seen before). It could perhaps have benefited from the addition of maps for those who are unfamiliar with the actions and places described.

Overall, very good work and of great importance for anyone interested in the battalion or the Northumbrian Division.

This book is up to Pen & Sword's usual high standards: a weighty hardback, nicely printed, solidly bound and, more to the point, packed full of well-researched information and photographs which won't have been seen by many before. If your ancestor served with this battalion then this book will be invaluable, particularly if read alongside the official battalion war diary.

Author Clive Dunn has used a myriad of sources to piece together this battalion's history from its origins in 1908 until the end of the war. There are accounts from the men who served as well as articles pulled from newspapers, and official sources such as published histories. A list of battalion awards, a nominal roll of men who landed with the battalion in April 1915, a roll of men known to have served in Volunteer Service Companies during the Boer War, Territorial Force War Medal recipients, and finally a roll of serving officers all provide layers of icing for this already rich fruit cake. There's also an index and a bibliography.