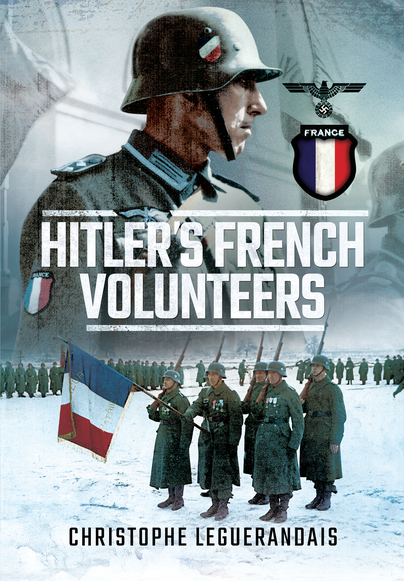 Click here for help on how to download our eBooks
Add to Basket
Add to Wishlist
You'll be £4.99 closer to your next £10.00 credit when you purchase Hitler’s French Volunteers. What's this?
Need a currency converter? Check XE.com for live rates

From 1941 to 1945, a large number of foreign soldiers were incorporated into the ranks of the German army in order to compensate for the enormous losses suffered by the Wehrmacht, including thousands of French. Whether fighting against the Soviets on the Eastern Front, with the Afrika-Korps in Tunisia or fighting with the occupying army in France, these volunteers generally took the plunge to join the Germans with the authorization of their own government, even though there was never any 'formal link' to the Vichy regime.

For the first time in the English language, this book provides details of the units' various insignias, along with rare and previously unpublished and personal photographs of the few surviving members interviewed by the author. As a result, a new vision of these collaborators emerges, allowing them to be regarded as adventurers or even nationalists. After all, despite being clothed in the “enemy's” uniform, the majority of these soldiers respected their oath of allegiance, often giving their lives in return.

It is well known that many Frenchmen served with the German forces. Indeed,
many were in the Waffen SS. Between 1941 to 1945 thousands of Frenchmen
were incorporated into the German army to compensate for the enormous
losses suffered by the Wehrmacht.
Frenchmen served fighting the Soviets on the Eastern Front, in North Africa
with the Afrika Korps and fighting with the occupying army in France. These
volunteers tended to serve with the “blessing” of their own government but
there was no formal link to the “Vichy Government”.
This book is their story, from inception until they surrendered. This interesting
book provides details of the insignia used by the various French formations,
along with numerous rare and previously unpublished photographs. The
author interviewed some of the few remaining members and their experiences
are noted in the book.
These Frenchmen joined for a variety of reasons. They made an oath of
allegiance and many of them paid for this with their lives. This volume charts
their history and presents in English a welcomed history of Frenchmen in
“German” uniform.
For many years, I have heard the stories about the French serving with the
Germans but this book presents an expert history of their service. I do not
know of any books that are as good as this one on this subject and the author
has done splendid service to their memory.

Reviewed by Untallguy on ARRSE

Living in France, Christophe Leguérandais has spent many years accumulating hundreds of rare photographs and documents, which portray his countrymen's involvement in pro-Nazi movements and militarily collaboration during the Second World War. He has written various articles on this topic for French books and magazines, as well as acting as an adviser for fellow authors and editors.