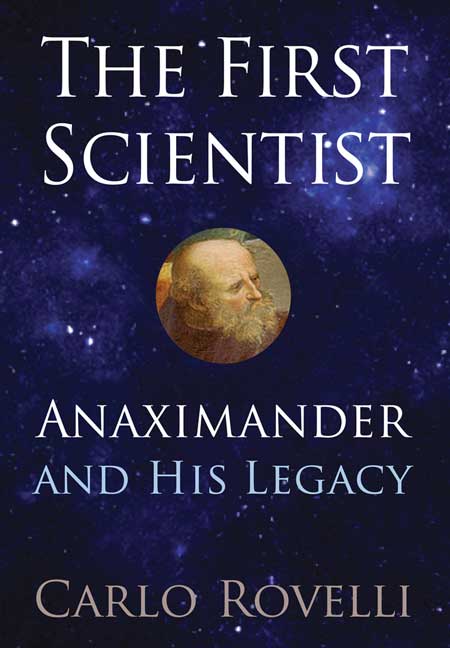 Anaximander and his legacy

Add to Basket
Add to Wishlist
You'll be £19.99 closer to your next £10.00 credit when you purchase The First Scientist. What's this?
+£4.50 UK Delivery or free UK delivery if order is over £35
(click here for international delivery rates)

Carlo Rovelli, a leading theoretical physicist, uses the figure of Anaximander as the starting point for an examination of scientific thinking itself: its limits, its strengths, its benefits to humankind, and its controversial relationship with religion. Anaximander, the sixth-century BC Greek philosopher, is often called the first scientist because he was the first to explain that order in the world was due to natural forces, not supernatural ones. He is the first person known to rnunderstand that the Earth floats in space; to believe that the sun, the moon, and the stars rotate around it—seven centuries before Ptolemy; to argue that all animals came from the sea and evolved; and to posit that universal laws rncontrol all change in the world. Anaximander taught Pythagoras, who would build on Anaximander's scientific theories by applying mathematical laws to natural phenomena. rnrnIn the award-winning Anaximander and the Birth of Scientific Thought, Rovelli restores Anaximander to his place in the history of science by carefully reconstructing his theories from what is known to us and examining them in rntheir historical and philosophical contexts. Rovelli demonstrates that Anaximander's discoveries and theories were decisive influences, putting Western culture on its path toward a scientific revolution. Developing this connection, rnRovelli redefines science as a continuous redrawing of our conceptual image of the world. He concludes that scientific thinking—the legacy of Anaximander—is only reliable when it constantly tests the limits of our current rnknowledge.

CARLO ROVELLI received his PhD in physics at the University of Padua. He has conducted research at Imperial College,Yale University, the University of Rome, and the University of Pittsburgh, and currently directs the quantum gravity group of the Center for Theoretical Physics at Aix-Marseille University. He is author of Quantum Gravity and What Is Time? What Is Space?, as well as many scholarly articles. His most recent book, Seven Brief Lessons on Physics,translated into thirty-four languages, is an international bestseller.