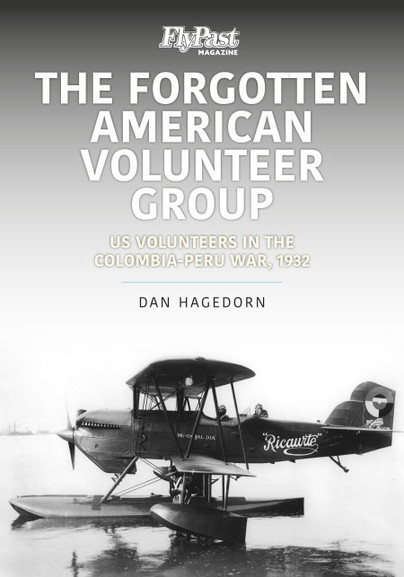 US Volunteers in the Columbia-Peru War, 1932

Preorder
Add to Wishlist
You'll be £11.99 closer to your next £10.00 credit when you purchase The Forgotten American Volunteer Group. What's this?
+£4.50 UK Delivery or free UK delivery if order is over £35
(click here for international delivery rates)

While volumes have been devoted to the legendary "Flying Tigers," the ultimate American Volunteer Group, another virtually unknown band of flyers preceded them in 1932. When Colombia and Peru became embroiled in what is known as the "Leticia Affair," a little-heralded arms race ensued. The Curtiss-Wright Export Corporation saw an opening and soon had not only sold the Colombians on an impressive assortment of aircraft types but also an American cadre to bridge the gap until their own crews were ready. Illustrated with rare contemporary illustrations, this books tells the fascinating story of these oft-forgotten men and the aircraft they flew.

Dan Hagedorn served 25 years in the US Armed Forces before becoming Research Team Leader and Adjunct Curator for Latin American Aviation at The National Air and Space Museum, Smithsonian Institution for 19 years. He was Senior Curator and Director of Collections at The Museum of Flight at historic Boeing Field in Seattle, the world's largest independent air and space museum and, following his retirement after more than eight years, became Curator Emeritus. He is author or co-author of 27 books and monographs and more than 150 journal articles, with an emphasis on the aviation history of Latin America.