Add to Basket
Add to Wishlist
You'll be £25.00 closer to your next £10.00 credit when you purchase The Forgotten German Genocide. What's this?
+£4.50 UK Delivery or free UK delivery if order is over £35
(click here for international delivery rates)

The Potsdam Conference (officially known as the "Berlin Conference"), was held from 17 July to 2 August 1945 at Cecilienhof Palace, the home of Crown Prince Wilhelm, in Brandenburg, and saw the leaders of the United Kingdom, the Soviet Union and the United States, gathered together to decide how to demilitarise, denazify, decentralise, and administer Germany, which had agreed to unconditional surrender on 8 May (VE Day).

They determined that the remaining German populations in Poland, Czechoslovakia and Hungary - both the ethnic (Sudeten) and the more recent arrivals (as part of the long-term plan for the domination of Eastern Europe) - should to be transferred to Germany, but despite an undertaking that these would be effected in an orderly and humane manner, the expulsions were carried out in a ruthless and often brutal manner.

Land was seized with farms and houses expropriated; the occupants placed into camps prior to mass expulsion from the country. Many of these were labour camps already occupied by Jews who had survived the concentration camps, where they were equally unwelcome.

Further cleansing was carried out in Romania and Yugoslavia, and by 1950, an estimated 11.5 million German people had been removed from Eastern Europe with up to three million dead. The number of ethnic Germans killed during the ‘cleansing’ period is suggested at 500,000, but in 1958, Statistisches Bundesamt (the Federal Statistical Office of Germany) published a report which gave the figure of 1.6 million relating to expulsion-related population losses in Poland alone. Further investigation may in due course provide a more accurate figure to avoid the accusation of sensationalism.

The history of WW2 should never be forgotten and yet some things like how the Germans felt afterwards have been, especially as many of those who were not Nazi’s were so often treated as if they were.

I do recommend this book for a factual and interesting account of how those people, innocent or otherwise, were treated.

"An uneasy but nonetheless readable interesting account and a much needed addition to the historiography of the time."

Few WWII authors have tackled this desperate and appalling subject – mainly because that is exactly what it is, desperate and appalling. Keith Lowe’s ‘Savage Continent’ originally opened up the subject of the post-war genocide of millions of German civilians living in Eastern Europe, particularly in the Sudetenland, Czechoslovakia, Poland and Hungary, many having lived there for generations. But Europe post-war was beyond care. The victorious allies were exhausted with their own domestic populations struggling with poverty and hunger, so why bother with the surviving Germans?

After all, since Hitler came to power in the 1930s, Europe’s Jews, Romanies, gypsies and anyone who disagreed with Nazi policies were simply murdered in their tens of thousands, later in their millions. For the main years of WWII the German army treated their subjected nations’ peoples with a ferocity that simply cannot be understood by rational people. When the war turned against Germany in 1943 the Germans ratcheted up their official killing programmes across Europe by using the very first computer system to trace Jews. But back to Peter Brown’s book; he honestly described the German perpetrators as ‘German’, too many modern authors and broadcasters wash over this description by calling things German as ‘Nazi’. Yes, the policy was promulgated by the Nazi Party but the perpetrators were ordinary Germans, and we should not forget that.

And so the war officially ends, but with the surviving German population largely homeless and without adequate housing, food or medical attention, and with a million missing German soldiers. While the Americans and British immediately brought in expensive relief programmes, little was done in Eastern Europe. The time had come for revenge and the German civilian survivors, particularly the women, were about to experience their orchestrated mass rape. The French sent in their North African troops to embark on the mass rape of Austrian women. The advancing Russian army had already been encouraged to plunder and rape as they advanced across Germany to Berlin; on their arrival Berlin’s women, it is reported as including females from 8 to 80 years, experienced the horror of on-going mass rape for some two weeks – partly as punishment and partly to humiliate the already desperate population. There was no mercy. In the year that followed tens of thousands of these women committed suicide while others needed medical attention and countless abortions.

I served in Berlin in the early 1960s; I saw and heard nothing about this subject until many years later. It was a taboo subject. German civilians paid an awful price for the savagery unleashed across Eastern Europe by their leaders and troops but I can better understand the concept of the subsequent post-war revenge by victims rather than the original genocide perpetrated by normal Germans against unarmed civilian populations. Oddly, hundreds of thousands of Germans might likely be descended from such incidents of mass rape.

A well written book which has expertly and objectively discussed a harrowing period in time.

The book is a very good look at the genocide committed by the German Nazi Party against ethnic Germans from Poland, Hungry and Czechoslovakia, all this on top of many Jews. One of the reasons for this was the ability to seize land, property, riches and assets belonging to those ethnic Germans and Jews. Sadly the Germans used this as a programme against ethnic people. Jewish, anyone with disabilities and you can lump into that the fact that the Germans used people to conduct experiments upon. Although this is a dark subject to read about, it has been researched very well and written and although this subject will not appeal to most, it is very successful at an academic level, certainly something many should read.

The Forgotten German Genocide by Peter C Brown* is an analysis of the Revenge Cleansing in Eastern Europe, 1945–50, as the subtitle describes. The book is very well structured. It starts with details on the Final Solution, how the euthanasia programme started and the gas vans. It goes on with details on countries, starting with Czechoslovakia, followed by Hungary and Poland, before ending with Germany. In each of those chapters Brown presents what the Germans and Nazis did and what happened to the ethnic Germans after the war ended... There is no clear figure of how many people were displaced, but the author puts the number at 11.5 million, of whom 3 million died. There were countless accounts of children and women being killed alongside countless accounts of women raped by Czech, Polish, Hungarian, Russian, Romanian forces. I did not know about this and the scale of it, so I can’t recommend enough this book. The people who were occupied wanted revenge, but their revenge looks like it was just as pointless as what the Germans did in the first place.

After terrible persecutions, murders and the subjugation of many of Europe's populace by their Nazi overlords, there was a overwhelming desire for revenge once they had been defeated. But the atrocities committed as acts of revenge were as unforgivable as what went before. They say revenge is sweet. There is nothing sweet about the events written about in this book. A harrowing but necessary read. History needs balance.

What an emotional and intense read... seriously.
If you're interested in history, this was an amazing book.
I was honestly impressed with this book and would gladly read others by this author.

Most people think the war ended in '45 and the world rebuilt and everyone and everything went back to normal. It didn't. Some of us grew up hearing about the "forgotten" the German Genocide, we know people who lived it first hand. The confiscating of property mass deportations, deaths, nightmarish. very informative book. 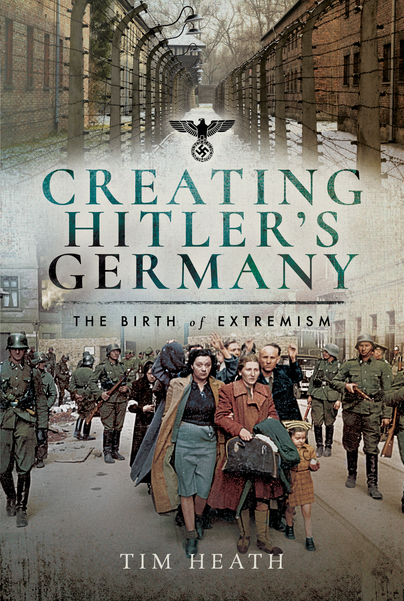 Germany's defeat in the First World War and the Treaty of Versailles that followed were national disasters, with far-reaching consequences not just for the country but for the world itself. Weaving the stories of three German families from the beginning of Germany’s territorial aspirations of the First World War to the shattered dream of a thousand-year Reich in the Second World War, Tim Heath’s rich narrative explores a multitude of rare and untapped resources to explore the darkest recesses of German social and military history. Creating Hitler’s Germany presents a nation’s journey not…