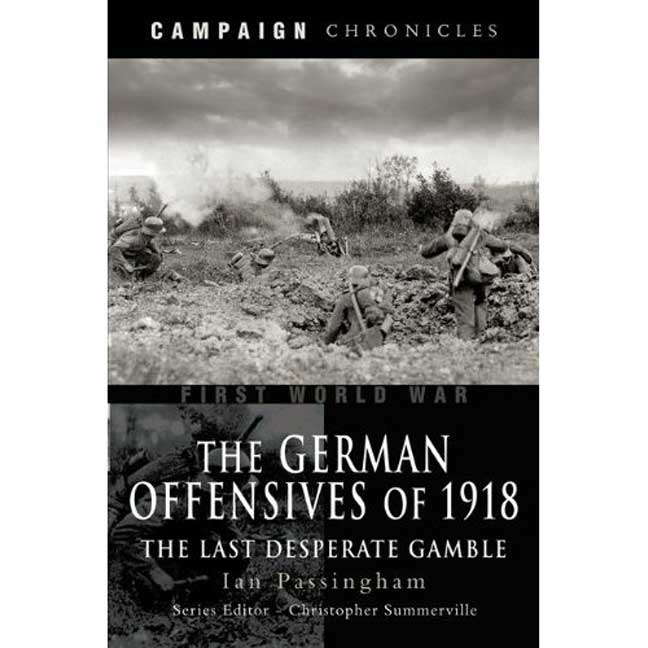 The German Offensives of 1918 (Hardback)

Add to Basket
Add to Wishlist
You'll be £19.99 closer to your next £10.00 credit when you purchase The German Offensives of 1918. What's this?
+£4.50 UK Delivery or free UK delivery if order is over £35
(click here for international delivery rates)

Few pivotal years in history are less understood than that of 1918. It was a momentous period, which began with Germany's desperate gamble to win the Great War through a sequence of offensives on the Western Front. Ian Passingham's graphic new study draws on a wide range of original German, British and French sources, and it features previously unpublished eyewitness accounts and photographs. He boldly reassesses German military doctrine, the strategic thinking behind the offensives and the effectiveness of the stormtroop tactics used. He also considers how the poor state of German military morale and the privations and unrest of the German people contributed to the army's defeat.

Whilst the First World War, at least from a British perspective, is covered in great detail - and with understandable focus on the events of 1916 - it is perhaps the events of 1918 that are very often misunderstood. This book does a wonderful job of telling the story of that year, analysing and vividly telling the story of the German Offensive of March 1918, Ludendorff's strategy and tactics, alongside the Allied resistance which resulted in the German failure ultimately achieve that final breakthrough. It is the ultimate story of 'so near.. but so far'.... Ultimately, for the various reasons described within, the Germans ran out of steam in their push, and the book tells each part of this story, then interlocks the next part of the story; the Allied counter-offensive, the 100 Days Offensive which broke the broke the German Army.

The book is concisely split into chapters which give the reader an excellent insight into this pivotal year of the First World War. This includes the wider background, and what was happening in the last months 1917. Importantly, and good grounding is given in the position of all sides at this time. Comprehensive detail is given on the campaign itself, breaking down the different elements, such as the events late March, intertwining the experience of the German perspective and that of the British and French.

The story of the early days of the German Offensive is detailed thoroughly, with personal stories of those army’s days. Just one, of Lance Corporal Charlie Amsden, details how he was to win a DCM, or te final stand of Walter Humphrey’s and fellow machine gunners. Amsden also commanded another Lewis Gun detachment and took on waves of German 16th Reserve Division assault troops, to help a Battalion withdrawal, as the remainder of his detachment were killed or wounded to a man. He kept up the Lewis Gun in action, taking up several firing positions as the retirement developed and forced the Germans to go to ground on a number of occasions, after ‘any of their comrades had fallen victim to Amsden’s steady and accurate fire’.

Various sections give background on things as they developed, including the Allied and German perspective on the 24th of March. It is built up how Ludendorff’s satiety altered once more shifting the main emphasis of Operation Michael back to the German centre and right, where the Second and Seventeenth Armies had faltered.

Interesting information is noted on the Kaiser visiting the front with in line with the German advances, and bringing positives news back home.  Within all of this, some orders was restored to the heaviest fighting so far, the German assault divisions had suffered heavy casualties, but the momentum and initiative sill appears to be with Ludendorff’s rooms..  But the story then builds in of how it was not yet clear, the tide was turning against Ludendorff given that he had not yet achieved his declared aim of the complete breakthrough and destruction of the British resolve to fight.. The book develops the story that although the Michael Offensive had forced gaps in the British line, it was a great cost for very little.

The story is concluded by how the German in the autumn was suffering greatly. The Allies had regained the numerical advantage. With comprehensive detail, the reader is made fully aware of how the tide had ultimately turned. The first major blow came for them at Amiens when the British Fourth Army employed nine divisions, supported by 400 tanks in the initial assault. In detail the story is built up of the extent of the Allied attack including the role of the Australian and Canadian Corps.

An Appendix at the back integrate how the Evolution of German tactics and weapons evolved, with Storm Battalion, and machine gun and artillery. Throughout, fantastic maps give you continued understanding of events as they happened connected to the text.

The last words of the book resonate:-
"Tragically, honourable defeat led to deep-rooted hatred against Socialism, Communism and Jewish communities and provided evil seeds from which the all-consuming and destructive monster of Nazism would grow, nurtured in its formative years by one Erich Ludendorff...."

Written in a pacy, easy style that glides along to provide sufficient information without delving into too much detail, the narrative is punctuated by the extensive use of first hand accounts to give a flavour of the fighting at ground level, together with analyses along the way highlighting the key issues to be considered in judging the impact of the campaigns and the command decisions taken.

The whole of 1918 proved to be momentous as Germany began its last desperate gamble to win the war through a sequence of offensives on the Western Front. The first of these was launched in March, on the Somme, against the British, and seemed set to achieve a swift and decisive victory. But stubborn resistance led to German failure and by August they were both exhausted and disillusioned. This work draws on a wide range of original German, British and French sources, featuring previously unpublished eyewitness accounts and photographs. First class work. 10/10.

Ian Passingham is a defence analyst and military historian. He is an authority on the history of the First World War and the battlefields of the Western Front. He has a special interest in the German armed forces between 1871 and the present day and has carried out detailed research on the German Army in both World Wars. His previous books include Pillars of Fire: The Battle of Messines Ridge, June 1917 and All the Kaiser's Men: The Life and Death of the German Army on the Western Front, 1914-1918.