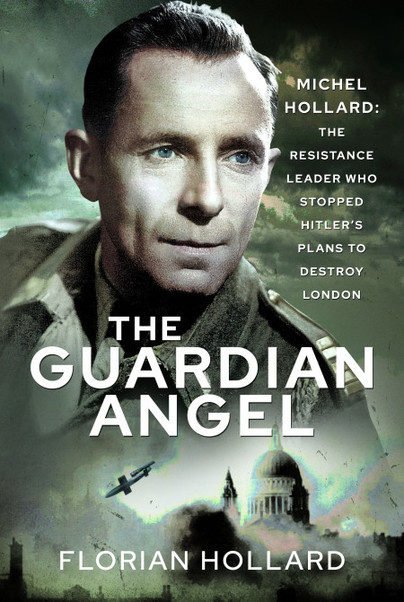 Preorder
Add to Wishlist
You'll be £15.99 closer to your next £10.00 credit when you purchase The Guardian Angel. What's this?
+£4.50 UK Delivery or free UK delivery if order is over £40
(click here for international delivery rates)

This book tells the story of an important yet little-known episode of 20th century history. Just as General de Gaulle did, Lieutenant Michel Hollard refused to accept France’s surrender in June 1940. A spirited soldier during the First World War, a disillusioned reserve officer in the Second, he worked out a bold defence strategy to counter Adolf Hitler’s barbarity and megalomaniac madness.

In 1943, Michel Hollard learned that the occupying army was carrying out suspicious construction work in north-western France. His enquiries led him to discover Hitler’s top-secret weapon pointing at London: the V-1. The accuracy of the intelligence that Michel Hollard revealed to the English avoided the worst for London. The launch sites were bombed before the V-1s were able to do their work of death as planned.

Betrayed, he was captured by the enemy, tortured and sent to Neuengamme concentration camp, then thrown into the hold of a ship destined to be sunk. Miraculously, he survived. By saving London, Michel Hollard contributed greatly to the success of the Normandy landings and therefore the final victory.

In honour of his achievements, a Eurostar train (the high-speed London-Paris service through the Channel Tunnel) was christened Michel Hollard in 2004.

Florian Hollard, son of Michel Hollard, is an orchestra conductor. During the Second World War he was a literature student of Georges Pompidou, the future French President. After his father was arrested by Hitler’s police, he joined the Resistance and took part in the Liberation of Paris. Founder-conductor of the Orchestre Symphonique de Tours, as well as choirmaster of the Oratoire du Louvre, he has been the guest conductor of numerous orchestras both at home and abroad, notably Paris, Berlin, New York, London and Tokyo.

To celebrate the historic fall of the Berlin Wall, 250 French and German performers in fraternal union interpreted Beethoven’s Ninth Symphony, conducted by Florian Hollard. The “Ode to Joy”, the mystical and flamboyant conclusion to the masterpiece, had officially become the Hymn of the European Union. An international audience at the Palais des Congrès de Paris gave a standing ovation to the symphony, the interpreters and to the renewed brotherhood of man.