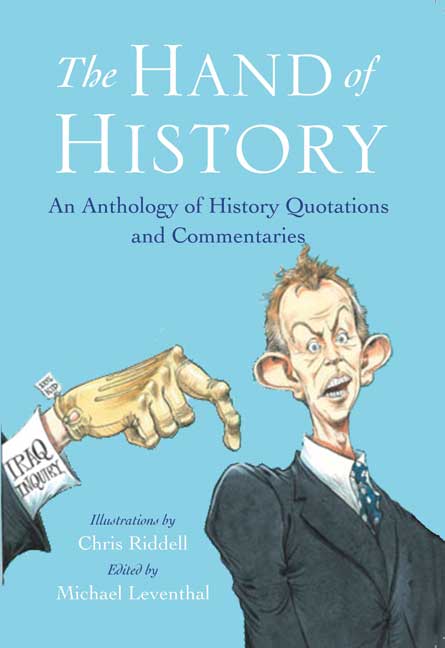 The Hand of History (Hardback)

An Anthology of Quotes and Commentaries

Add to Basket
Add to Wishlist
You'll be £13.99 closer to your next £10.00 credit when you purchase The Hand of History. What's this?
+£4.50 UK Delivery or free UK delivery if order is over £35
(click here for international delivery rates)

As featured by The Times newspaper. ‘Until lions have their historians, tales of the hunt shall always glorify the hunter’ - Nigerian proverbrnrn ‘This proverb undermines the idea of “objective” history. It’s all too easy to think that bias in history is bad, and that objectivity is good. But objectivity is usually a euphemism for the history of the victors, or the history of the hunters. What would an objective history of the Iraq war look like? rn- Mary Beard, Professor of Classics at Cambrige University.

For this fund-raising book famous writers from around the world have selected their favourite quotes about history . Each has selected a quote and provided an original commentary explaining why it strikes a chord with them.

PLEASE NOTE: THIS BOOK WILL NOT BE PUBLISHED AND SENT OUT UNTIL SUMMER 2011. ALL ROYALTIES WILL BE DONATED TO PARKINSONS UK.

More than one hundred historians worldwide have contributed to this book. Hopefully, therefore, it is an international view of the writing of history and a collection that shows the great range of interests that it encompasses.

The Hand of History is a compulsively readable compendium of memorable words.

Book of the Month Club, USA

The Hand of History is an intriguing collection of thoughts and observations by an equally intriguing collection of individuals. Free reign has been given to the writers and historians who have contributed to this anthology, and the result is as diverse as the individuals themselves.
From the brief quotes of fifteenth century statesmen to lengthy expositions on the political ideology of Canada’s Pierre Trudeau, this book is, if nothing, wholesome food for thought.