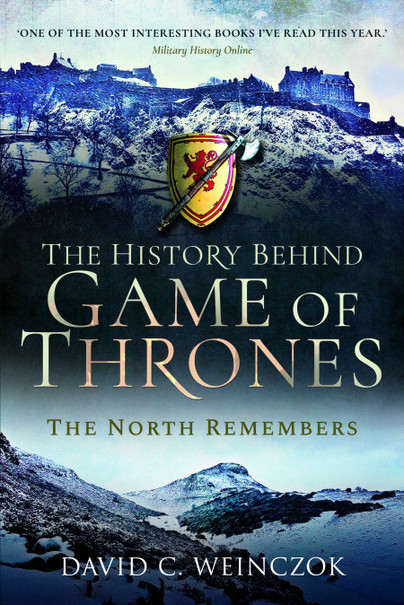 The History Behind Game of Thrones (Paperback)

You'll be £10.39 closer to your next £10.00 credit when you purchase The History Behind Game of Thrones. What's this?
+£4 UK Delivery or free UK delivery if order is over £30
(click here for international delivery rates)

A fun book to read for Game of Thrones fans and history fans! I think everyone saw the borrowed from real history references in the series, but this bok lays out all the history for you.

I absolutely devoured the writing, the style was easy, fun, and educational without being too text book like and would likely appeal both to history fans and fantasy fans alike. The book was meticulously researched as it moved literally from the study of the land of Westeros and Scotland, all the way to the history that connected the two worlds. And the book was just really enjoyable to read so good job David Weinczok.

An interesting read that will appeal to fans of GOT or people interested in Scottish history.
I learned a lot and it was great to discover the history of places and the relationship to the sage.
Recommended.

I recently finished reading a review copy of David C. Weinczok's analysis of George R.R. Martin's "The Game of Thrones." The book in question, published by Pen and Sword in 2019, and entitled "The History Behind Game of Thrones: The North Remembers" is a thoroughly entertaining study of Weinczok's interpretation of the historical basis of Martin's work. He situates events principally in Scotland and does a superb job of illustrating this with numerous geohistorical examples of his thesis. The book reads like a peculiar and enchanting hybrid of history and fantasy and in so doing shines a light on both genres (history and fantasy). Indeed, as I read the book, the boundaries between fantasy and history seemed to collapse and fold in on themselves in a complex pattern that serves to reveal how incredibly successful each genre is in informing and explicating the other. I enjoyed it thoroughly and urge anyone with an interest in either of the two genres under discussion or simply an interest in Scottish and Medieval history and culture to peruse a copy. You will be glad you did.

An incredibly interesting view on the real life history behind the television series Game Of Thrones, definitely would recommend to anyone interested in the real history.

When I read the Game of Thrones (still waiting for book six!), I had envisioned Scotland and England. I just knew that the “wall” was probably Hadrian's Wall, and was able to identify other locations as well.

This book illustrates it all so well: the locations and the countryside – even the history of Scotland. I did not tie together the “Red Wedding” and the massacre described in this book. Oh, heck, as I slapped my forehead.

Mr. Weinczok's book makes history very interesting and easy to read and understand. Very well done, sir!! And the castles – ooohh – got to love them.

I want to thank NetGalley and Pen & Sword/Pen & Sword History for forwarding to me a copy of this most delightful book for me to read, enjoy and review.

Weizczok’s book is densely packed with information. Fortunately, it is clearly written and not in the least bit dry for this fan of Game of Thrones and history... I highly recommend this book for anyone who has enjoyed Game of Thrones – either as a book, or in the television format.

Ok!!!!! Yes!!! This is amazing for GOT fans. I am obsessed with Scotland and this takes fiction to reality. I have only skimmed through, so I will update my review more thoroughly later, however it is excellent!! It is a phenomenal perspective that brings Westeros to life. The descriptors are so strong you can feel the cold on your skin from outside the pages. Outstanding!!!!

This is a fab companion book for anyone who has enjoyed the Game of Thrones series, either through the books or TV show. It delves into the inspiration behind the stories, exploring real life battles and conflicts etc. I found it really interesting examining the parallels between the real and the fictional, and think many other GOT fans would too - I can see this book being a very popular gift!

A quite interesting and informative read, I have long been a fan of GoT and have visited many parts of Scotland many times but I have to admit i was not fully aware of the history of those places, you don’t need to be a fan of GoT nor an ardent Scottish nationalist to enjoy this book, it is really enjoyable.