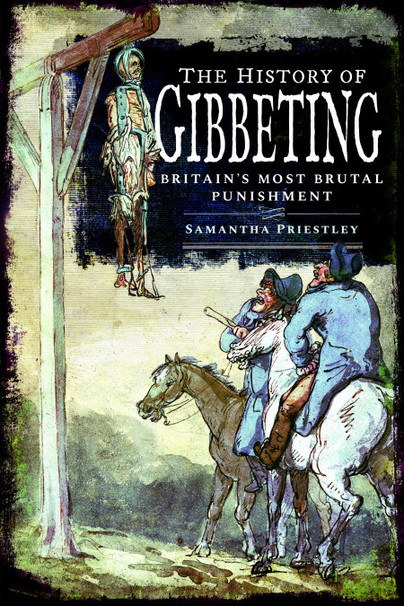 The History of Gibbeting (Kindle)

Click here for help on how to download our eBooks
Add to Basket
Add to Wishlist
You'll be £4.99 closer to your next £10.00 credit when you purchase The History of Gibbeting. What's this?
Need a currency converter? Check XE.com for live rates

The history of gibbeting is the story of one of Britain’s most brutal forms of punishments, the hanging of criminals in a body shaped metal cage as a warning and as a form of justice. From the folklore of live gibbetings to the eerie historical documenting of this weird post-execution tradition, The History of Gibbeting examines how and why we dealt with murderers and other serious criminals in this way. The book uses case studies through history and takes a look at how the introduction of the Murder Act shaped our relationship with gibbeting for years to come, and how we as a society demanded the most shocking post-mortem treatment of criminals. Whether gibbeting was ever a successful deterrent, it is still a fascination today and gibbet cages remain on display in museums all over the country.

A fascinating look at early crime deterrence and punishment in a much more brutal era. I had been familiar with the form of punishment only through my studies of pirates before and was amazed at how widespread it had been as a means of doling out justice. The author provides a history without sensationalism or exploitation but remains authentic to the sources and the history. Very well done.

I had never heard of Gibbeting, so this book was a real shock as I read. The torture these criminals endured was something I cannot even imagine experiencing. The deaths and displaying of the bodies was creepy! I did learn a lot from this and am thankful that we do not have such cruel methods of punishment now.

... the subject is unlikely to be written about in such depth for years to come. This could therefore become the standard book to read on this awful subject.

This fascinating book about The history of gibbeting may also have been subtitled, "Everything you wanted to know about gibbeting but were too afraid to ask."

The History of Gibbeting, with its Halloween-esque typeface for the word 'GIBBETTING', coupled with a cover illustration which looks to have come straight from the pen of Gilray (although I could see no acknowledgement as such), shouts out "Read me and be fascinated!" and indeed, that is exactly what I have done. Until reading this book I had no idea, for instance, that criminals could be gibbeted dead or alive, or indeed that the cages in which they were suspended, were custom-made.

We learn about the sorry fate of unfortunate individuals and are fascinated as we read about the fate that befell thieves and pirates. No wonder then that the author concludes her brisk walk-through of gibbeting with a chapter entitled 'A modern fascination'.

The book is well illustrated with photos and illustrations of gibbetts, gibbeting in action, gibbett landmarks and so on. The subject is so compelling that one wonders why it has not been properly addressed before now and Samantha Priestley is to be congratulated for doing her homework and producing such a reasonable account of this gruesome punishment. There is a short bibliography and I know that my children will be as equally fascinated with this book as they were with the Pen & Sword book about mummies which was published a few years ago. I can see that this new book on gibbeting is also going to be just as well-thumbed and well-read.

This is a thorough and interesting read on one of history’s more gruesome forms of torture and display of the dead. It’s hard to imagine living in a time when this was the norm. Highly recommended for any history buff with a strong stomach.

The History of Gibbeting is an easy read on a difficult subject.

What can you say about a book about hanging bodies for display? I thought it was thoroughly researched and entertaining even given the gory subject matter.

I love it when I come across history books of the unusual and macabre. The History of Gibbeting is certainly one of these. The book covers gibbeting throughout English history, from its first recording to when it ceased as a punishment. Gibbeting is the continuation of punishment after execution by placing the condemned corpse in a tailor-made cage and hanging it from a post for all to view as a warning not to commit the same crime.

It was fascinating to learn that gibbeting may have evolved from crucifixion which was not a common punishment at that time, so much so that it became landmarks and place names, it wasn't cheap and it was an inconsistent form of punishment. If you want to know more you'll have to read the book!

The book is well researched and I loved that primary sources where included in the book.

This was a small book but it was a very informative and well planned out book which I got a lot out of and learnt a lot about the subject. Credit must also go out to the author who made the book not only detailed and informative but an easy read too. Although it was a quick read I feel informed, strangely pleasantly amused.

I have to say that I was not aware that gibbeting involved metal cages, nor how society clamoured for post-mortems on gibbeted victims. Absolutely fascinating, but not for the faint-hearted!

I had been really looking forward to reading this book, I think it is my fascination with true crime and also a little bit of the macabre combined with a strong interest in what used to happen in the past.

I have to say that I thought that it was a fascinating book. The author has done a great job with the overview and detailing what gibbeting was. I live in Warwickshire, near the border of Leicestershire and there were quite a few gibbet posts in the area and I did know a few of the places that were mentioned!

I liked the addition in the book of the details about the different criminals and those that were given the sentence of to be “hung in chains”, I was quite surprised that there were so many that were subject to “live” gibbeting which for me has to have been the ultimate punishment at that time, even worse for me than those that would have been hung, drawn and quartered. It makes me shudder just to think about it.

I did like how the author has posed the question as to whether being hung in chains did actually deter other criminals from committing the same, or similar crimes... as from their research and what they have shared in the book it would seem that it was not much of a deterrent!

Overall, The History of Gibbeting was an “easy” read and I loved the amount of detail the author used, it was clearly well researched and I thought it was very well written too – it is 5 stars from me for this one!!

A fascinating and informative read on the punishment Gibbeting, a form of history that has not been widely covered. The men would be hung from chains in a cage in the air. From the rise of the gibbet to the last man put into one, the History of Gibbeting takes us through the reasons behind why they were used, the crimes committed, and the hope that by hanging in public view, it would stop anyone from wanting to commit similar crimes. Wonderfully researched and written!

This book literally does what it says on the tin! It's a well researched, comprehensive look at the history of gibbeting. I love the idea of a book looking at a specific type of punishment and the crimes that fit them through the history of its use. I'd love to read a book just like this one on the guillotine as well! Well written, with a good pace and fascinating stories, this was a truly excellent book about a familiar, and yet surprisingly not well-known form of punishment and execution.

A very interesting piece of history!

Gibbeting - one of Britain’s most brutal forms of punishment.

I had never heard of this word or punishment before, so I found this a really interesting, yet horrifying read.

Filled with lots of information and details, this is the perfect read for any history lovers. I love that it also featured some pictures at the end of the book.

I wonder what crimes... if any would be committed if this punishment was still around today?

Gibbeting has been portrayed in movies and books, often with a more "romantic" view of what their original intent was. The true history of what these gibbets represented was much more brutal, a deterrent for those who were thinking about committing crimes.

From the rise of the gibbet to the last man put into one, the History of Gibbeting takes us through the reasons behind why they were used, the crimes committed, and the hope that by hanging in public view, it would stop anyone from wanting to commit similar crimes. For a while, gibbeting was popular, giving the community a sense of justice being served, while punishing the perpetrator with the lack of a decent burial. But as with most sensations, this one eventually burned out,

This book gives a great background of the rise and decline of gibbeting, the many different crimes, perpetrators and the reasons (or lack thereof) for the crime being committed. I loved this book, and it was fascinating to read the many different accounts and try to figure out why the judges would sometimes order the gibbeting of the condemned.

The best aspects of the book are Priestley’s liberal use of primary source documents, such as newspaper accounts or court documents, and the number of specific examples cited, both of which lend a sense of authority and immediacy to the discussion. I also greatly appreciated the nearly-20 pages of illustrations and photographs at the end, which included drawings or photos of actual gibbets, preserved sites, letters, flyers, and other associated artifacts... it remains an informative work of introduction to the topic, and for those looking to learn more, Priestley offers up a bibliography of other works and online resources.

Samantha is a writer based in Sheffield, England. She won the H E Bates competition and The Tacchi-Morris Prize for short stories. Her chapbooks, Dreamers and Orange Balloon, are published by Folded Word. She is the author of the novels Despite losing it on Finkle Street, Reliability of Rope, and A Bad Winter. Samantha writes short stories for the Slumber app and a monthly column, InOrganic, at Folded Word. She lives in north Sheffield with her partner, two daughters, two dogs and one cat.